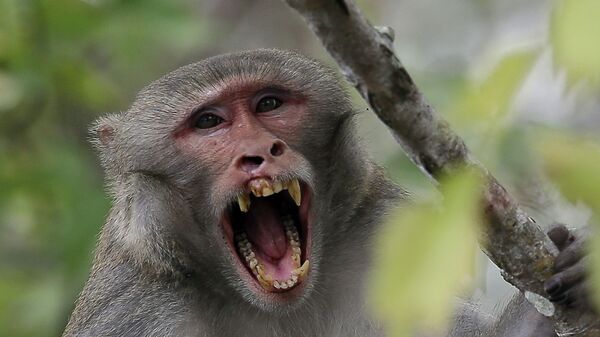 New Delhi (Sputnik):  While monkeys around the world are infamous for snatching cameras, phones, and other valuables from tourists in order to ransom them for food, a primate has stunned social media users by pulling off a kidnapping stunt that resembles a scene straight out of a movie.

Mounted on a mini bike, riding through the wind, a monkey gatecrashed into the main doors of a house to attempt to kidnap a toddler. The video of the encounter is going viral on social media; it shows a monkey riding a bike and grabbing a girl. The monkey attempts to flee by dragging the baby girl, but was forced to flee empty-handed, courtesy of an elderly man, who arrived and shooed the kid-sized King Kong away.

The video is leaving many social media users frightened and others in stitches, as they are amazed looking at the “unbelievable” kidnapping attempted by the monkey. Several pointed out that the monkey might have been trained to pull off the mischievous prank.

If that monkey has been taught to learn a bike ... possibly a by a circus or an individual expert in handling monkeys ; can this video not be staged by teaching the monkey to enact this particular scene to be captured on a video to go ...you know what

Whose selling bikes for monkeys 🐒 showing such aggression! So powerfully dragged this kid to a distance...scary!