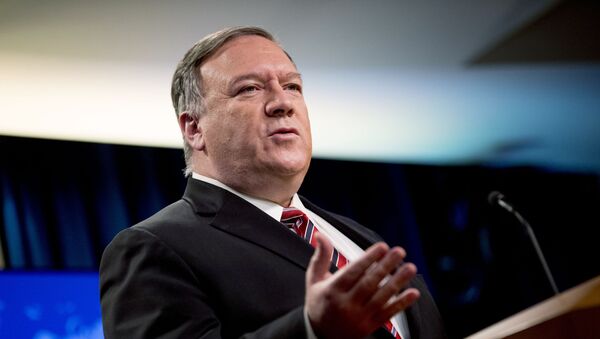 The Trump administration has claimed it has evidence that the virus SARS-CoV-2 originated in a Wuhan lab where some of the world's most dangerous pathogens are studied. China denies that the virus had been leaked from the lab, and the WHO also believes it wasn't man-made.

China's state media has called out US Secretary of State Mike Pompeo for his claims about the origins of the new coronavirus.

The Global Times, a newspaper under the auspices of China's ruling Communist Party, published an editorial on Sunday that rebuked Pompeo for floating “groundless accusations.”

The newspaper suggested that Pompeo “does not have any evidence, and during Sunday’s interview, he was bluffing.”

“As the US presidential election campaigns are underway, the Trump administration has implemented a strategy designed to divert attention from the incompetence it has displayed in fighting the pandemic,” reads the editorial. “It is clear that their goal is to blame China for the pandemic by pinpointing the country as the source of COVID-19.”

What did Pompeo say?

Pompeo, who has presided over Washington's hard-line China strategy of recent years, claimed on Sunday there was “enormous evidence” that a high-security lab in the Chinese city of Wuhan was the source of the coronavirus pandemic. Donald Trump made a similar claim days earlier and threatened to impose new tariffs on China.

The secretary appeared confused over whether he was claiming that the virus was man-made or was of natural origin but accidentally escaped the lab. “Look, the best experts so far seem to think it was manmade. I have no reason to disbelieve that at this point,” he told ABC’s This Week.

The interviewer then reminded Pompeo that US intelligence had stated exactly the opposite, to which he replied: “That’s right. I agree with that.”

Pompeo created even more confusion after he said in a radio interview that same day that “we don’t know precisely where it (the virus) began. We don’t know if it came from the Wuhan Institute of Virology.”

He has also claimed that China had intentionally concealed the severity of the outbreak and stockpiled medical supplies before it was officially confirmed to be a contagion.

How did China respond?

Beijing has pushed back on US accusations and denied any mishandling of the virus, blaming the Trump administration for trying to shift the focus from its own missteps in the fight against the pandemic.

“They have only one objective: to try to shirk responsibility for their own epidemic and prevention and control measures and divert public attention,” Chinese Foreign Ministry spokesman Geng Shuang said of YUS officials on Thursday.