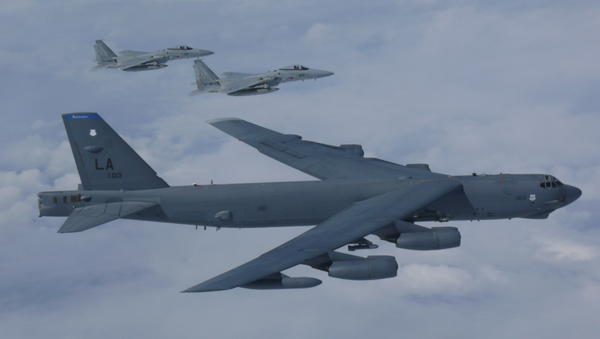 During a flyover tribute to New Orleans, Louisiana, medical professionals fighting COVID-19 on Friday, an access panel from a US Air Force B-52 Stratofortress bomber fell from the aircraft, plummeting onto private property without injury.

Typically B-52s drop high-powered munitions on enemy targets, and some even carry all-powerful nuclear weapons, but on May 1, one of two B-52s sent on a tribute flight for first responders accidentally dropped something else: an access hatch improperly secured prior to the flight.

Local CBS affiliate 4WWL first reported the incident, noting that US Air Force Captain Christopher Sullivan informed the outlet that nobody was injured by the falling plane part, which was found on private property and returned to the Air Force.

Sullivan told the outlet the incident would be investigated, but that the plane itself was in no danger of falling out of the sky as the hatch did. The plane it fell from was built in 1961.

Photos shared by Baton Rouge ABC station WBRZ show the hatch in a person’s hand, appearing to be about 1 foot long.

B-52 aircraft part falls in New Orleans during flyoverhttps://t.co/X2uA30JQzw pic.twitter.com/j8Aw9oeJHi

​The B-52 was one of two that performed the flyover on Friday morning, flying out of nearby Barksdale Air Force Base with two F-15 Eagle fighter jets and passing over New Orleans and Baton Rouge.

According to the latest data from the New Orleans city government, the city has recorded 6,557 cases of COVID-19 and suffered 447 deaths. In the state of Louisiana, there have been 29,673 cases and 1,991 deaths.

The US Navy’s Blue Angels show team is scheduled to fly over the city in a similar tribute on Wednesday; here’s hoping everything stays intact and in the sky.