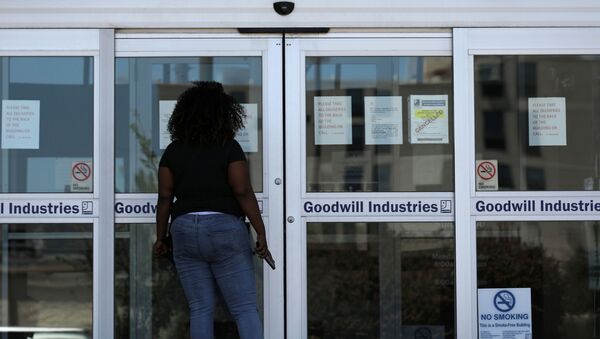 © REUTERS / Carlos Barria
Subscribe
The US Labor Department’s employment report for April, which will be released Friday, is expected by experts to show that the COVID-19 pandemic has caused the largest one-month hit to the US labor force ever recorded.

According to economists who spoke to the Wall Street Journal, the new report will show that from March 15 to April 18, the unemployment rate increased by 16.1%, and employers eliminated 22 million nonfarm payroll jobs, which is “the equivalent of eliminating every job created in the past decade,” the outlet noted.

About 26.5 million claims for unemployment were filed in the US between March 15 and April 18. Another 3.8 million people filed unemployment claims during the week afterward; however, that number will be represented in the May jobs report.

The job losses would result in the highest unemployment rate since 1948, when that figure started being reported. In addition, the number of jobs lost in the month of April would be the highest since 1939.

The April statistics are in sharp contrast to the unemployment rate recorded in February, which was at a half-century low of 3.5%, the Wall Street Journal reported. The report will also show the industries most affected by the pandemic. According to University of Chicago economist Joseph Vavra, the six industries most impacted by the virus are restaurants and bars; travel and transportation; entertainment; personal services, such as dentists, day care providers and barbers; some retail stores; and some manufacturers, like those of aircraft and cars.

Arizona State University economist Alexander Bick, who conducts online surveys to determine unemployment rates, estimates that the unemployment rate between April 12 and 18 was 16.2% compared to 20.2% in late March. However, he believes the decline in unemployment was caused by Americans leaving the labor force, rather than by more people finding work.

“Just because you’re not counted as unemployed doesn’t mean you don’t want a job. And a lot of people fall in that category now. In times like these, it’s better to look at the employment rate,” Bick told the Journal.

Bick’s data also shows that more women than men lost their jobs from mid-March to mid-April, although men’s job losses picked up recently due to layoffs in construction and office work. Furthermore, his data showed that people older than 50 lost more jobs than younger people.