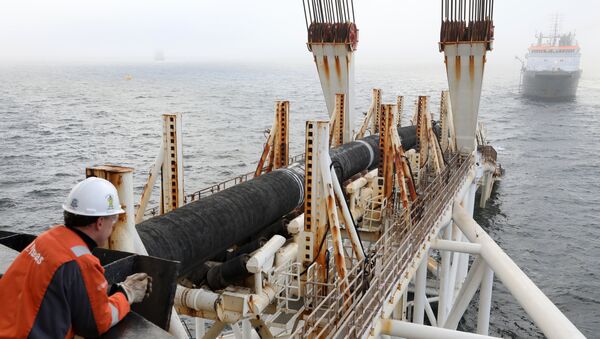 Earlier this year, the ship left the Russian port of Nakhodka and headed towards Singapore. It has changed its course many times before arriving in Kaliningrad almost three months later.

The Russian pipe-laying vessel Akademik Cherskiy, which Moscow earlier said is capable of completing the construction of the Nord Stream 2 gas pipeline, has arrived at the port city of Kaliningrad, the ship-tracking website Marine Traffic said.

It added that the ship docked on Saturday evening.

Earlier this week, the Akademik Cherskiy, which has been operated by Gazprom Fleet since 2016, entered the pipeline construction zone not far from the Danish island of Bornholm and headed towards Kaliningrad.

In February, the pipe-laying ship made its way from the Russian port of Nakhodka to Singapore, and since then has changed its course multiple times. It took the ship 83 days to reach Kaliningrad.

In late 2019, the US adopted the National Defence Authorisation Act for 2020 which outlined sanctions against companies involved in the implementation of the Nord Stream 2 project. Almost immediately, the Swiss-based offshore contractor Allseas Group suspended work on the project amid the risk of US sanctions.

Commenting on the situation with the Nord Stream 2 project in December 2019, Russia's Energy Minister Alexander Novak said that the use of the Akademik Cherskiy ship remained one of several options to finish the construction of the pipeline, adding that it would take some time to carry out additional preparations for the mission.

Russian President Vladimir Putin said that it was possible to complete the Nord Stream 2 construction without foreign companies' assistance, though this would require extra time. According to him, the pipeline will be operational no later than the first quarter of 2021.

The 1,198-km (745-mile) twin gas pipeline is expected to carry up to 55 billion cubic metres of natural gas per year from Russia to Germany, bypassing the existing route via Ukraine and Poland.

The US has been seeking to undermine the construction of the pipeline, threatening every company involved with sanctions. Moscow has repeatedly called against politicising the Nord Stream 2 project, emphasizing its purely economic purpose.