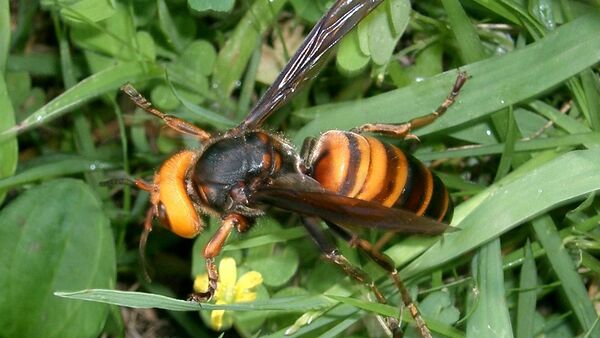 While the hornets' mandibles allow them to decimate a beehive in a matter of hours, their powerful venom and long stingers make these insects a credible, and possibly lethal, threat to humans as well.

Scientists in the United States have embarked on a full-scale hunt for dangerous insects known as Asian giant hornets which have been spotted in the country for the first time and which threaten to decimate local bee populations if left unchecked, The New York Times reports.

According to the newspaper, the insects, simply described as “murder hornets” by some researchers, were apparently spotted in Washington State last fall, and at least one beekeeper there apparently found one of his bee colonies wiped out - "thousands and thousands of bees with their heads torn from their bodies and no sign of a culprit".

With their queens capable of growing up to two inches in size, Asian giant hornets possess sharp mandibles that potentially allow them to "wipe out a honeybee hive in a matter of hours", while their long stinger – which can puncture a beekeeper's suit – and potent venom make them a credible threat to humans as well, as the hornets kill up to 50 people a year in Japan.

Now, researchers are hunting for the hornets before the insects "establish such a deep presence that all hope for eradication could be lost".

"This is our window to keep it from establishing", Chris Looney, an entomologist at the Washington State Department of Agriculture, said. "If we can’t do it in the next couple of years, it probably can’t be done."

The newspaper adds that Asian giant hornets were also apparently seen in Canada, with one hornet being spotted in British Columbia in November, some 10 miles away from the site of the sightings in Washington State, while a whole hive of hornets was located in Vancouver Island before that.