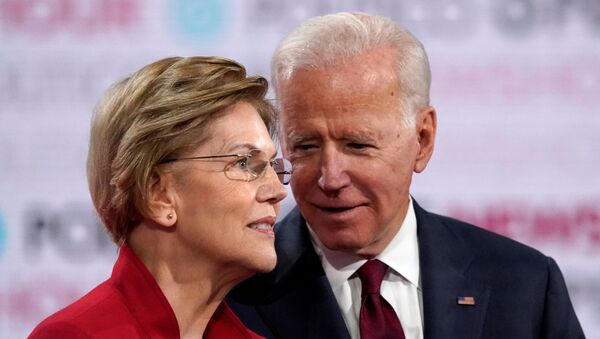 © REUTERS / Mike Blake
Subscribe
Former Vice President Joe Biden is the presumptive Democratic nominee in the 2020 presidential election against incumbent Donald Trump. He is yet to make a final decision on his choice for a running mate but has pledged to pick a woman.

Seventy-one percent of Democratic voters say that Biden should pick Warren as his running mate, heading the list of potential female options.

The progressive Massachusetts politician also topped the first-choice pick for the position with 36%. Harris followed at 19%, who edged Abrams at 14%, and Klobuchar who came in fourth with 13%.

The majority of white Democrats and liberals support Warren as the VP candidate. For black Democrats, she remains a contender but their votes are split between Abrams and Harris too.

Senator Warren also was also among the top three choices for moderate Democrats, alongside Klobuchar and Harris.

CBS noted that familiarity appeared to play a role, as all 3 candidates who topped the list also ran in the 2019 presidential race.

Warren was also the top pick for those who consider "economic expertise" to be an important factor for the position as well as those who think Biden should pick a progressive to be his running mate.

Economic expertise and crisis management are two of the top qualities that Democratic voters say they want from a vice presidential candidate.

55% of Democratic voters also say that Biden should make a “bold” choice with his vice presidential pick, while 45% say he should rely on a "safe option".

Biden has promised to pick a woman as his running mate and on Saturday said his selection committee was vetting “more than a dozen women".

In the same poll, Biden leads Trump in a head to head national election matchup - 49% to 43%.

The poll was conducted through a survey of 200 US residents between April 28 and May 1 and has a margin of error of 2.5 points.

Elizabeth Warren dropped out of the 2019 presidential race after coming third in her own state on super Tuesday, trailing both fellow progressive Senator Bernie Sanders and Joe Biden.

000000
Popular comments
Perfect, muricans can watch biden nuzzle warrens neck while he asks her to call him a dog-faced pony soldier. See image.