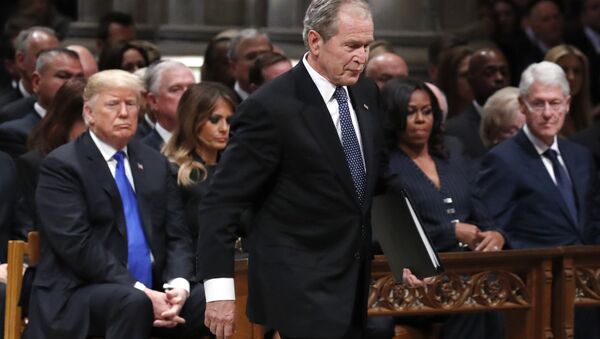 While many social media users seemed to appreciate the ex-president's message, others seemed reluctant to let slide certain events that transpired during Bush's presidency.

As the United States continues to battle the COVID-19 pandemic, former US President George W. Bush has stepped forward to call upon the populace to set aside their differences in the face of this insidious viral threat.

Addressing people via a tweet posted by the George W. Bush Presidential Center, the ex-head of state praised the medical professionals who risk their health for the sake of the health of others, noting that the disease in question threatens not just one's physical well-being, but also people's "sense of safety, security and community".

"Let us remember how small our differences are in the face of this shared threat," Bush said. "In the final analysis, we are not partisan combatants. We are human beings, equally vulnerable and equally wonderful in the sight of God. We rise or fall together", Bush said while concluding his nearly three minute-long speech. "And we are determined to rise. God bless you all".

The ex-president's address elicited a somewhat mixed response online, as while a number of netizens praised him for his words, others seemed reluctant to forget certain events that transpired during Bush's presidency.

I too am "not a fan" of illegal wars and torture.

Great video, but why again did so many people die in Iraq? How was the response to Katrina? pic.twitter.com/0UeWFsWixQ

God bless you and thank you, Mr. President. I miss you, sir, and I wish you were in office now.

We’ll never forget you started the War in Iraq based on lies that then gave birth to ISIS.

It appears that Trump himself took note of this development, putting his two cents in and thus drawing the attention of his proponents and detractors alike.

oh is it Bring Every Stupid Petty Grudge To Twitter Day again already? seems like the last one was just yesterday

You are nothing but a bloated observer of the coronavirus.

We have the best President in history NOW. God bless President Trump!

And several netizens also used this opportunity to criticize US President Donald Trump's response to the coronavirus crisis.

On the same day this beautiful video was released by a former president, the current president: