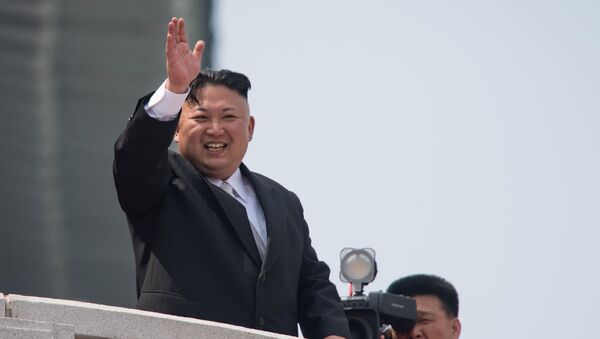 © AFP 2021 / ED JONES
Subscribe
DPRK state news agency KCNA posted pics of a cheerful Kim Jong-un surrounded by his officials and younger sister to draw a line under a slew of rumours about his health, but the news caused a new meme flood on social media - a sequel to the one that followed reports of the North Korean chief’s severe illness and bolder claims of his death.

Twitter users are feeling genuinely ecstatic over the claimed return to public life of North Korean leader Kim Jong-un, whose whereabouts, let alone well-being has been on everyone’s lips - and among the top Twitter trends - for 20 days straight.

North Korea's state news agency KCNA released snapshots of a smiling Kim inspecting a fertiliser plant outside Pyongyang along with other party officials, in an apparent attempt to debunk the snowballing rumours about the "irreplaceable" leader.

But demanding social media users doubted if all was fair and square, alleging that the pictures and the report depicting the crowd “bursting into thunderous cheers of 'hurrah!' for the Supreme Leader….” are not authentic.

Social media wags have long succumbed to the temptation to play off all news about Kim Jung-un in laughable memes: one user, for instance, exploited a Simpsons meme where a patient's condition is upgraded from “dead” to “alive” after being transferred to a better hospital:

..whereas another portrayed Kim’s re-emergence as the resurrection of Jon Snow in the “Game of Thrones”.

A third posted a curious device …or rather a man lying in an iron lung that was previously used to treat patients suffering from tuberculosis:

“Kim Jong Un laughing at memes which we made of his fake death", another posted below a respective picture of the ROFLing North Korean boss.

*Kim Jong Un laughing at memes which we made of his fake death#KimJungUn #NorthKorea pic.twitter.com/572bwNRkOG

“Kim Jong-un pulling up to the UN to announce he’s still alive and he’s killing everyone who made memes about him", another wrote posting a video of a dancing man who looks slightly like Kim:

Kim Jong-un pulling up to the UN to announce he’s still alive and he’s killing everyone who made memes about him pic.twitter.com/u1StJ7YxPG

And many Kim-focused memes, gifs, and videos continued to flood social media, closely following those that were centred around Kim’s rumoured illness only days earlier:

#Kim Jong Un #NorthKorea
Now ,He is giving a final touch to list of people ,who spread his death news, tweeted it, retweeted , memes Creators and trollers .😂 pic.twitter.com/UIVGRk3DqU

Asked about the KCNA report on Kim, US President Donald Trump said: “I'd rather not comment on it yet".

“We'll have something to say about it at the appropriate time", he told reporters at the White House.

Speculation about Kim's health has been rife after he missed the birthday celebrations of state founder Kim Il Sung on 15 April - a key holiday in North Korea that marks the founding of the country, the Day of the Sun. South Korean and US officials have since addressed the claims of anything from Kim being in “grave danger” to dead, arguing the leader staying low-key wouldn’t come as a surprise amid the global corona-induced lockdown. The other day, the leader was alleged to be self-isolating at the historic elite resort of Wonsan, on the country’s eastern coast.