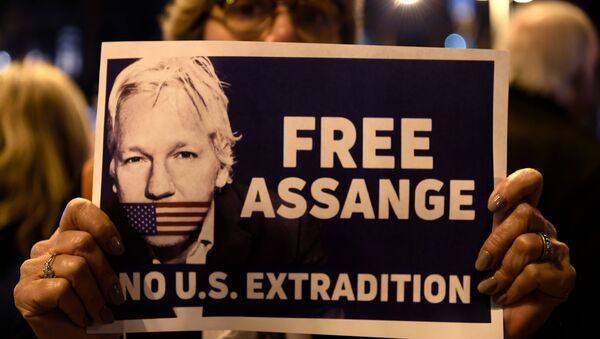 © AFP 2023 / Lluis Gene
Subscribe
International
India
Africa
LONDON (Sputnik) - The new leadership of the United Kingdom’s Labour party will likely stay away from Jeremy Corbyn’s support for WikiLeaks founder Julian Assange, which may impact the capacity of pro-whistleblower party activists to organise, according to Chris Williamson, a former Labour member of parliament for Derby North.

"I hope and pray that there will be some positive noises but given Starmer's appalling record in relation to Julian when he was a DPP [Director of Public Prosecutions] I'm not holding out much hope. Given the way some of them were jumping on the smear bandwagon against Julian and calling for him to be extradited to Sweden on some nonsense, trumped up accusations which as you know just didn't stand up ... I'm very pessimistic about that," Williamson said.

Keir Starmer was elected as the new party leader on April 4, succeeding left-leaning Corbyn, who announced his plans to resign after his party suffered in December the worst election defeat since 1935. Starmer, who has a record of a "middle of the road social democrat," headed the Crown Prosecution Service from 2008 to 2013. Under him, the UK insisted that Sweden keep its case against Assange open.

Williamson went on to note that even though Corbyn "did say something which was good and better than what we had in the past," he still could have said more as a leader to oppose Assange’s potential extradition to the United States. The ex-lawmaker expressed hope that Corbyn would speak out more, as he is "now a bit freer."

"He's on the back benches now so he obviously still has a Parliamentary platform, [ex-Shadow Chancellor of the Exchequer] John McDonnell has, to be fair, started to speak out as well which is good, but in terms of the actual official Shadow Cabinet saying much I think it's highly unlikely", he added.

Most Labour members are, meanwhile, sympathetic to Assange, and it is a "disgrace" that the party "hasn't done more to speak out in support of Julian and the principle of freedom of speech," according to Williamson.

"I mean don't we need people like Julian Assange and Chelsea Manning now? … We absolutely need his voice. And not just his voice but that sense that freedom of speech is something we cherish. That people can speak truth to power without the consequences that Julian has had to experience", he explained.

There is a lot of support for Assange among Labour’s grassroots, which is, however, not reflected in mainstream media, according to the politician.

"Where are the mainstream journalists? What are they doing? Why aren't they here with us? Why aren't they speaking out about this? It's appalling. I know probably why as their paymasters don't like it and they are fearful and they'll be implications for themselves etc but it's not good enough. Especially when some of the papers have used information (Wikileaks) has given them but now they've just abandoned him. Despicable behaviour", he argued.

Assange is currently awaiting a decision on whether he will be extradited to the US. If extradited, the whistleblower will face up to 175 years in prison.