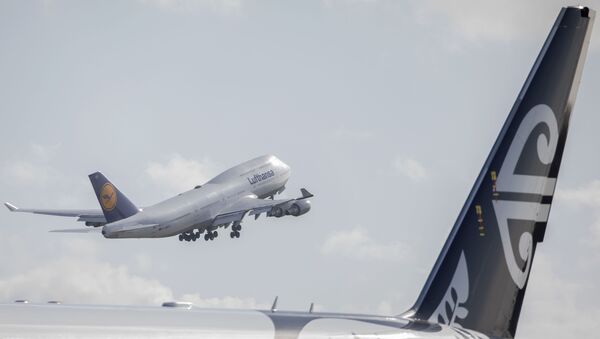 © AFP 2023 / Sanka Vidanagama
Subscribe
International
India
Africa
Lilia Dergacheva
All materialsWrite to the author
A total collapse in air travel induced by the sweeping pandemic has caused the German national carrier Lufthansa to turn to the government for assistance, enraging airline rivals.

Lufthansa is seeking a €10 billion bailout from the government in exchange for an eye-popping stake in the airline, Der Spiegel reports, citing the company's complaints about losing as much as €1 million an hour due to the pandemic-induced lockdown.

The proposal reportedly stipulates that the government will hold over half of the stake — €5.5 billion — as a silent partner, with a guaranteed return on the sum amounting to 9%.

The state-owned development bank Kreditanstalt for Wiederaufbau (KFW) is expected to inject another €3.5 billion, backed by the German government, the edition adds.

Separately, the crisis-hit Lufthansa, which has said it currently operates merely 1 percent of its total flights but has to pay for fixed fuel contracts, etc., announced last week that it was in "intense negotiations" with various European governments over potential funding and is reportedly expecting aid from Austria and Switzerland in addition to Germany.

While the terms haven’t yet been discussed at length, Finance Minister Olaf Scholz told German daily the Passauer Neue Presse that "taxpayers can count on us not to conduct these talks naively."

Responding to the news of a potential bailout, which was first floated in early April, the CEO of low-cost air carrier Ryanair, who on Friday announced the company is planning to shed up to 3,000 jobs due to crippled demand, lashed out at rivals seeking to receive billions in state aid.

"We are going to be competing now with airlines that have received gargantuan sums of state aid and will be able to keep going forever regardless of any kind of economics,” he noted with visible irritation.

The raging health crisis has taken its toll on global economies, affecting a lion's share of businesses - predominantly tourism and air travel - due to citizens being instructed to stay at home in accordance with across-the-board quarantine and self-isolation measures.