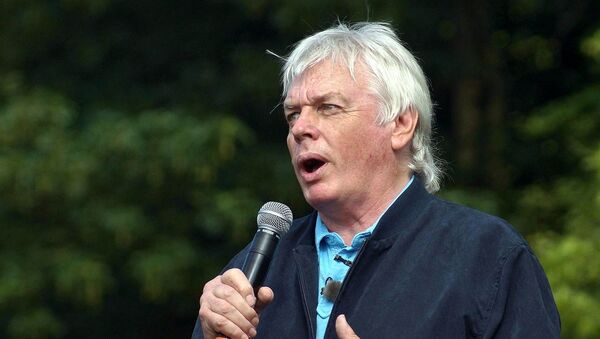 CC BY 2.0 / Tyler Merbler / David Icke
Subscribe
David Icke is no stranger to controversy, and has in the past, among other things, claimed that the world in governed by a secret cabal of extraterrestrial reptiles and that the British Royal Family are lizards.

Facebook has removed the official page of renowned conspiracy theorist David Icke after he made a controversial post about the origins of COVID-19.

Mr Icke had reportedly shared a number videos in which he made claims that the Coronavirus pandemic is linked to 5G networks, while in another he said that the disease had been spread by a Jewish group.

The social media giant said that it had removed Mr Icke from its website for “repeatedly violating our policies on harmful information.”

Following his removal from Facebook, Mr Icke then stormed to Twitter to slam the company as “fascist” for deleting his page. Furthermore, Mr Icke shared a picture of Facebook CEO, Mark Zuckerberg, with the caption, “The little boy gofer for global tyranny.”

The Centre for Countering Digital Hate said in an open letter calling for Mr Icke's banning from social media that his conspiracies about Coronavirus had been viewed more than 30 million times.

Its chief executive, Imran Ahmed, has been quoted as saying that the kind of information shared by Mr Icke “puts all of our lives at risk by encouraging the public not to comply with clinical guidance.”

Hope Not Hate, a UK-based campaign group, said that it, “welcome news that Facebook have removed David Icke’s page.”

They went on to add that, “he [Mr Icke] has promoted dangerous conspiracy theories including the idea that COVID-19 is a hoax.”

Mr Ickle has also been accused on multiple occasions of using his large social media platform to spread antisemitism.

British broadcaster Rachel Riley, herself a campaigner against antisemitism, welcomed Facebook's decision, saying, “the hate preacher was banned from Australia. Big arenas have rejected him, yet social media orgs allow him a megaphone (& pocket the profits). Facebook have finally deleted him today!!”

The rest of us: Thank you NHS 🌈👏 thank you key workers👏 we’re grateful for your sacrifices and appreciate you. #StayHomeSaveLives

David Icke: This total load of 🤬🤬🤬
A big middle finger up to everyone and his pocket lined for his trouble.#LiesCostLives #DeplatformIcke https://t.co/a5Fe7dX4WG

Twitter has responded to criticism that it has not taken the same steps as Facebook by removing Mr Icke’s profile, saying that “prioritising the removal of COVID-19 content when it has a call to action that could potentially cause harm.”

Twitter has been widely quoted as saying in response that it is, “prioritising the removal of COVID-19 content when it has a call to action that could potentially cause harm.”

“As we've said previously, we will not take enforcement action on every tweet that contains incomplete or disputed information about COVID-19. Since introducing these policies on 18 March, we've removed more than 2,200 tweets. As we've doubled down on tech, our automated systems have challenged more than 3.4 million accounts which were targeting discussions around COVID-19 with spammy or manipulative behaviours,” a Twitter spokesperson added.

The 5G theory alleges, among other things, that Coronavirus has been caused by frequencies used for the new wireless technology which impair the human immune system. The theory has spread like wildfire across social media, with many arguing that it is in fact true. As a result, across the UK alone, there have been attacks on around 60 5G masts recorded by the authorities, most of which were set on fire.

000000
Popular comments
“In a world of full of manipulation, half-truths and lies, the conspiracy theory is often a safer bet than the official story.” ― Gary Hopkins
bullwinkle
2 May 2020, 16:31 GMT3
000000
And Google/YouTube pulls a video of 2 Bakersfield, California emergency clinic doctors that totally disputes the panic and hysteria propagated by the media and ill-informed "officials". Anyone sense a pattern here? The real question is "to what end"?

TruePatriot
3 May 2020, 01:03 GMT2
000000
Newsfeed
0
New firstOld first
loader
LIVE
Заголовок открываемого материала
Access to the chat has been blocked for violating the rules . You will be able to participate again through:∞. If you do not agree with the blocking, please use the feedback form
The discussion is closed. You can participate in the discussion within 24 hours after the publication of the article.
To participate in the discussion
log in or register
loader
Chats
Заголовок открываемого материала
Worldwide
InternationalEnglishEnglishMundoEspañolSpanish
Europe
DeutschlandDeutschGermanFranceFrançaisFrenchΕλλάδαΕλληνικάGreekItaliaItalianoItalianČeská republikaČeštinaCzechPolskaPolskiPolishСрбиjаСрпскиSerbianLatvijaLatviešuLatvianLietuvaLietuviųLithuanianMoldovaMoldoveneascăMoldavianБеларусьБеларускiBelarusian
Transcaucasia
ԱրմենիաՀայերենArmenianАҧсныАҧсышәалаAbkhazХуссар ИрыстонИронауОssetianსაქართველოქართულიGeorgianAzərbaycanАzərbaycancaAzerbaijani
Middle East
Sputnik عربيArabicArabicTürkiyeTürkçeTurkishSputnik ایرانPersianPersianSputnik افغانستانDariDari
Central Asia
ҚазақстанҚазақ тіліKazakhКыргызстанКыргызчаKyrgyzOʻzbekistonЎзбекчаUzbekТоҷикистонТоҷикӣTajik
East & Southeast Asia
Việt NamTiếng ViệtVietnamese日本日本語Japanese中国中文Chinese
South America
BrasilPortuguêsPortuguese
NewsfeedBreaking
01:00 GMTWho has the Edge Between Manchester United and Liverpool?
00:12 GMTBritish Military Brings Over 100 People Who Had Left Afghanistan to UK - Defense Ministry
YesterdayUS Seeking Clarity Over Turkey’s Intention to Declare US Ambassador Persona Non Grata
YesterdayUS Authorities Getting Veterans Involved in Resettlement on Afghan Refugees - Reports
YesterdayBiden’s Popularity Drops More Than That of Any Other US Leader Since End of WWII - Poll
Yesterday‘Rust’ Director ‘Gutted’ by Fatal Shooting of Halyna Hutchins on Set
YesterdayPotty-Mouthed PM: Broadcaster Blocks Boris Johnson's Remarks on Gay Men, Muslim Women
YesterdayHome Run! The Astros Win a Ticket to the World Series Amid Sign-Stealing Scandal
YesterdayColombian Authorities Reportedly Capture Elusive Drug Lord Otoniel, Leader of Clan del Golfo
YesterdayTwitter CEO Jack Dorsey Issues Cryptic Warning of ‘Hyperinflation’ Soon To Happen in the US
YesterdayOne Person Killed, 7 Injured in Shooting Near University Campus in US
YesterdayIran Set to Cooperate With Islamic World in Nuclear Development - Spokeperson
YesterdaySupermarkets in UK Reportedly Use Cardboard Cut-Outs to Disguise Empty Shelves
Yesterday5.0 Magnitude Earthquake Shakes La Palma as Spanish Island Territory Reels From Volcano Eruption
YesterdayJeremy Clarkson Slams 'F***ing Government' at Farming Awards Ceremony - Video
YesterdayPakistan Denies Reports of Preparing to Sign Airspace Agreement With US
YesterdayWatch Massive Migrant Caravan Push North Into Mexico as US Reports Record Apprehensions
YesterdayWatch Iranian Governor Getting Slapped on Stage During His Inauguration
YesterdayAssange's Extradition Incomprehensible After Revelations CIA Plotted to Kill Him, Fiancée Says
YesterdayUnderwater Treasure May Point to Location of Long-Gone 'Island of Gold' Empire