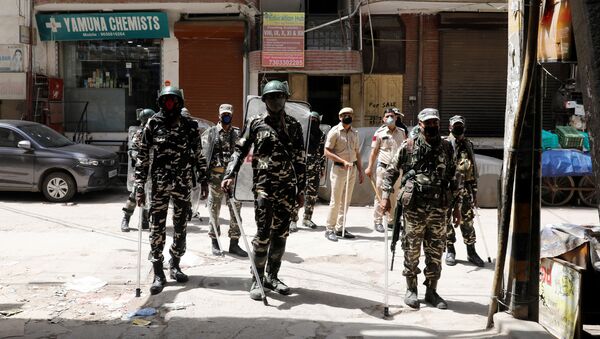 New Delhi (Sputnik): India has been under a strict lockdown since 25 March as a way to tackle the further spread of the COVID-19 pandemic. Amid the lockdown, Indian cops have been on their toes, trying to maintain order across the country.

In the city of Janaldhar in the state of Punjab, a young boy named Anmol Mehmi has been booked on charges of “attempted murder” after he tried to escape a police check post and bumped his car into a policeman named Mulkh Raj. Mehmi kept on driving even after the police officer ended up atop the vehicle's bonnet.

The “horrific” video of this incident began making the rounds on Twitter on Saturday. Netizens sharing the video tagged senior officials from the Punjab police, along with state chief Amarinder Singh to get their attention to the deed.

This is Jalandhar's Milk bar Chowk, A Policeman is dragged on bonnet of a car driven by a young boy, who did not stop at a check post for checking horrific ! @capt_amarinder @DGPPunjabPolice pic.twitter.com/k3vI6DjJmP

​Soon afterwards, the Jalandhar Police commented on this video disclosing that Mehmi, along with his father Parminder Kumar have been booked for “attempted murder” for “almost running over Mulkh Raj”.

​This is not the first time that police officials on duty have been physically assaulted amid the lockdown in India.

Reports and videos of police officials being beaten, spat on, and attacked have surface online several times during the lockdown.

The news comes on the same day 122 Central Reserve Police Force personnel tested positive for COVID-19, in a COVID-19 hot spot in Delhi.