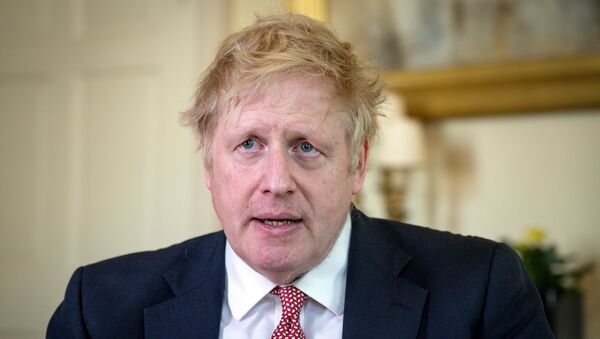 Tommy Sheridan
All materials
At his first Covid19 press briefing in weeks UK’s part-time Prime Minister, Boris Johnson should have announced his immediate resignation from office and issued a series of apologies.

Apologies to all the families of the victims of Covid19 and in particular for the premature deaths of the hundreds of health and social care workers who have died in the line of duty delivering care without the necessary personal safety equipment and in the midst of a serious health crisis made immeasurably worse by his government’s criminal irresponsibility.

Further detailed inquests must be conducted in the future. But even the limited investigations to date prove beyond all doubt that the Tories and Johnson have been responsible for seriously reducing the capacity of the health and social care systems to deal with pandemics like Covid19. This - despite clear warnings four years ago that urgent measures were required lest the health service would be overwhelmed and frontline health and care workers would be put at risk through lack of personal safety equipment. Four years ago these stark warnings were delivered to the Tory cabinet in the form of Exercise Cygnus and they were cynically and criminally ignored. No wonder the Tories were desperate to hide the existence of the Report from the public:

“There has been a reluctance to put Cygnus out in the public domain because frankly it would terrify people,” said the former senior government source yesterday.

“It’s right to say that the NHS was stretched beyond breaking point [by Cygnus]. People might say we have blood on our hands but the fact is that it’s always easier to manage the last outbreak than the one coming down the track. Hindsight is a beautiful thing”.

Tories have ‘blood on their hands’

People might say the Tory government has ‘blood on our hands’ because they do have blood on their hands. They were warned by independent medical experts of serious failings and matters that had to be addressed and they ignored those warnings. That qualifies as culpability for frontline worker deaths in my book.

The recent BBC Panorama investigation on Tory government health service failures was both explosive and unique. Explosive because it laid bare the failures at the heart of government which have literally cost the lives of frontline health and care workers and unique because it appeared on the establishment controlled channel which is so often docile and remiss in holding Tory Ministers and governments to account. Even the BBC can no longer ignore the reality of criminal negligence at the heart of the Tory government. Public health expert, Professor John Ashton, described the Tory government’s lack of preparation on Personal Protective Equipment (PPE) as ‘breath-taking’, resulting in health and care workers being compelled to work in unsafe conditions:

"The consequence of not planning; not ordering kit; not having stockpiles is that we are sending into the front line doctors, nurses, other health workers and social care workers without the equipment to keep them safe" .

Government minister Victoria Atkins told BBC Breakfast she was "very, very sorry to hear" of the Panorama report but what she really meant was she was ‘sorry’ the government had been caught out and exposed as the irresponsible charlatans they are. Apologies are only meaningful and useful when they are sincere and carry consequences. When Johnson resigns apologies from his government ministers and his own will be credible and meaningful.

The depth of deceit at the heart of the government is truly nauseating. Their PPE claims were untrue, their pontifications about the level of preparedness for the virus were fictitious and their attempt to deny now that their initial approach was not a ‘herd immunity’ one is vile. Like the Little Englander and arrogant chauvinistic nationalists, they are, they rejected World Health Service advice and the ‘test, track, trace and isolate’ strategies embraced by others in Europe and across the world.

They were warned on March 2nd by the reputable Imperial College Advice Paper that their ‘herd immunity’ strategy could claim in excess of 250,000 elderly, vulnerable and poor citizens’ lives and they blatantly ignored those dire warnings. A recent Sunday Times expose claims Johnson’s chief political adviser and other Tory high heid yins were callous and glib about potential elderly Covid19 deaths:

“And at a meeting in early February it’s claimed Cummings said it was all about:

herd immunity, protect[ing] the economy and if that means some pensioners die, too bad.

Cummings chaired a meeting on the virus with representatives of big tech companies. Also present at the meeting were the government’s chief scientific adviser Sir Patrick Vallance (who backed the herd immunity strategy) and NHS chief executive, Simon Stevens”.

On Thursday 12th March, while strenuously ignoring social isolation warnings and allowing mass gatherings at football matches, horse racing events and music concerts Boris Johnson disastrously reversed the previously announced Covid19 testing strategy which would have complied with the ‘test, track, trace’ approach that has worked so well elsewhere in the world:

“The UK government said on Thursday that it would no longer try to “track and trace” everyone suspected of having the virus. Instead, under plans outlined by Boris Johnson and his medical and scientific advisers, testing would be limited to patients in hospital with serious breathing problems, which may be caused by coronavirus but could also be because of flu. Isolation at home would be a voluntary measure, but anyone with a persistent cough or temperature would be asked to do so”.

A clearer display of arrogance informed by ignorance and glib indifference to the potential loss of lives caused by his approach is hard to imagine. The day after Johnson announced the radical and fatal change in testing approach the World Health Organisation’s (WHO) Director General, Dr Tedros Adhanom Ghebreyesus, stated categorically on March 13th that all countries should test as widely and comprehensively as possible to find every case of coronavirus and stop the pandemic in its deadly tracks:

“You can’t fight a virus if you don’t know where it is. Find, isolate, test and treat every case to break the chains of Covid transmission. Every case we find and treat limits the expansion of the disease”.

So despite the stark Exercise Cygnus warnings from four years ago, the dire Imperial College warnings of March 2nd and the WHO ‘test, track trace’ warnings of March 13th Johnson and his government didn’t try to change strategy until March 23rd when lockdowns to enforce social isolation were belatedly introduced and the consequences of ignoring all the PPE shortage warnings began to unravel and needlessly claim the lives of hundreds of frontline workers.

The attempts to rectify the deeply flawed testing strategy have been farcical and dishonest to the core. Johnson blurted out a ridiculous daily tests target of 250,000 on March 25th at a time when less than 7,000 tests a day were being carried out. By April 1st only a tiny minority of frontline health workers had been tested for Covid19 - 2,000 people out of 500,000 frontline NHS England workers, representing 0.4% of the workforce.

On the 2nd of April Health Minister Hancock announced the new government target of 100,000 a day by the end of April without mentioning the Johnson 250,000 target but the next day, April 3rd, he confirms Johnson’s 250,000 tests a day is still the government target but the absolutely firm and specific timeline target is the 100,000 a day which will be implemented by April 30th.

Now the government are trying to claim they have carried out the highest number of daily tests at 52,000 which is barely half the number firmly promised on April 2nd but the truth is even more scathing for Hancock, Johnson and the Tory government as the actual number of legitimate tests is not 52,000 but only 33,000 as it has been revealed that the government headline figure includes 19,000 retests and therefore only a third of the number of people Hancock said would be tested by now have actually been tested. Could this shower even organise a piss up in a brewery? I doubt it.

An excruciatingly embarrassing article for Johnson and his Tory government was published the other day from an unlikely source. It contained the detailed information which exposes just how pathetic and fatal the Tory Covid19 strategy has been. Using worldwide data and allowing for differences in compilation and definitions, the UK tops the table for Covid19 deaths in total, deaths per million of the population and deaths per thousands admitted to hospital for treatment. Once care home Covid19 deaths are added to the hospital reported deaths the UK is the deadliest place in Europe to contract and die from Covid19. What a shameful record.

While places like South Korea, Taiwan and New Zealand applied rigorous ‘test, track, trace’ strategies alongside stringent social isolation lockdowns the UK opted for the irresponsible ‘herd immunity’ strategy until they were compelled by real deaths and spreading panic to change course. Taiwan with a population of 24 million has recorded only 6 Covid19 deaths. New Zealand with just under 5 million of a population has recorded 19 deaths. South Korea with 51.2 million citizens has recorded 247 Covid19 deaths.

At the heart of Europe with a population approaching 84 million Germany also applied an early ‘test, track, trace’ strategy alongside social isolation measures and their death toll from Covid19, although higher than Asian nations like Taiwan and South Korea, is significantly lower than that in the UK with 6,470 recorded deaths. The UK figure is now over 26,100 with many experts suggesting it will be significantly higher when improved recording of Covid19 care home deaths catches up with reality. A figure in excess of 26,000 deaths in the UK compared to 6,470 in Germany is a shocking difference which highlights the negligence of Johnson and his government.

The author of the article which lambasts the UK government performance in the Covid19 battle is a Tory MP and former cabinet minister, David Davis. As well as harpooning Johnson for his woeful leadership he should be holding his own hands up in the air as a criminally guilty party in the systematic destruction of the health and social care service across the UK. In response to the data exposing the UK’s miserable record in tackling Covid19 he writes:

“Either way, before we move on to the next stage the Prime Minister should be looking very hard at the practices in Asia, and in Norway, Austria, Finland, and Germany, to establish how they have maintained a death rate less than one third of ours, and adapt it to our own use as fast as possible. And give our NHS a better chance of victory.

The best way to give the NHS ‘a better chance of victory’ against Covid19 and in facing up to the multitude of other serious health challenges it faces is for Johnson and the Tories to resign from office. They have misled the UK from as far back as 2010 and their leadership since the start of this health crisis has been as wretchedly consistent as the last ten years. The message to those who gather to clap for our carers each Thursday night at 8pm is abundantly clear. If you really want to keep the NHS safe, then every Tory voter should stay at home during elections.