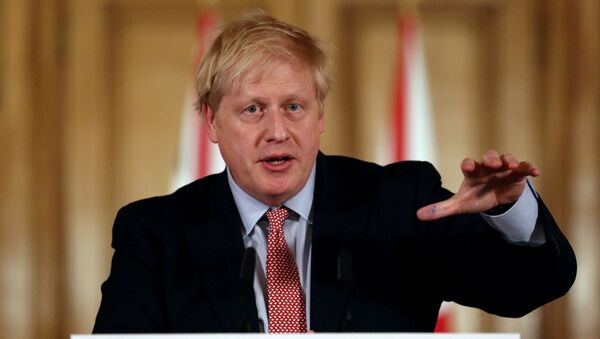 © REUTERS / Simon Dawson
Subscribe
International
India
Africa
Lilia Dergacheva
All materialsWrite to the author
The pledge for a “comprehensive” re-opening algorithm comes as Downing Street officials have warned against a premature easing of the COVID-19 lockdown, arguing it may carry certain perils, like risks of a second spike in cases - something PM Johnson described as impermissible, in terms of the nation's health and economy.

Boris Johnson has promised to deliver a "comprehensive plan" next week on how to effectively ease the lockdown after declaring the UK has passed the peak of the coronavirus flare-up. Downing Street is expected to produce a "road map, a menu of options" explaining how to get the economy to unfreeze and send children back to school while still reining in the epidemic.

"In short, how we can continue to suppress the disease and at the same time restart the economy", the PM pointed out, as he fronted his first Downing Street press conference since being hospitalised for worsening COVID-19 symptoms. He also leapt at the chance to praise the NHS saying he had been "very,very lucky" admitting though that "thousands of people have been less fortunate than I was”.

However, the PM cautioned that the timing around relaxing individual restrictions would depend on "where we are in the epidemic" and what the updated data suggests.

The PM drew special attention to the R value - the number of people that one infected person passes the virus to - noting it needs to stay under one to avoid a second wave of COVID-19.

At the press conference, Mr Johnson warned a second spike in cases must be avoided not just because of the death toll it would bring, but because of the potential to inflict even worse "lasting economic damage".

"That's why we have to calibrate our measures so carefully and make sure we not only unlock the economy gradually, but also find ways of continuing to suppress the disease, and possibly find new, more ingenious ways of suppressing the disease", he added stressing the importance of wearing face masks in public spots during the re-opening.

The Telegraph earlier reported citing sources that Johnson is highly unlikely to lift the restrictions any time soon, with Dominic Raab citing the not so positive example of Germany, as it went for an early lifting of the lockdown.

“Chancellor Merkel has made it clear that they might need a second lockdown in Germany if the infection rate continues to rise", the UK foreign chief said at a Downing Street briefing earlier this week, admitting that the same reported uptick in the UK “is a very real risk".

Reopening: From Sector to Sector

Last week, days after Boris Johnson was released from hospital after finally testing negative for corona, the prime minister famously promised to “fire up” the struggling crisis-hit economy.

While construction sites and other essential businesses are expected to resume operating some time soon with strict guidelines on social distancing in place, the question is still open about schools. Education Secretary Gavin Williamson previously said the government had "no plans" to open schools over the summer period, while Foreign Secretary Dominic Raab said it would be "inconceivable" without some further measures introduced.

With regard to offices in Britain, property services provider CBRE has drawn from its experiences in Asia to issue guidance on how to reopen workplaces with minimal risks. It advises against a "full throttle" return to work, with social-distancing measures needing to be reduced gradually and in line with public health instructions.

According to the latest figures from the Department of Health and Social Care, 26,771 have people died in all settings as of 30 April - an uptick of 674 from the number announced on Wednesday, 29 April.

England’s chief scientific adviser Sir Patrick Vallance emphasised that the number of people turning to hospitals across the country still needs to be decreased, though largely praising the current trend:

The UK is due to further revise its outlook on the easing of coronavirus-related restrictions on the economy and social life on 7 May.