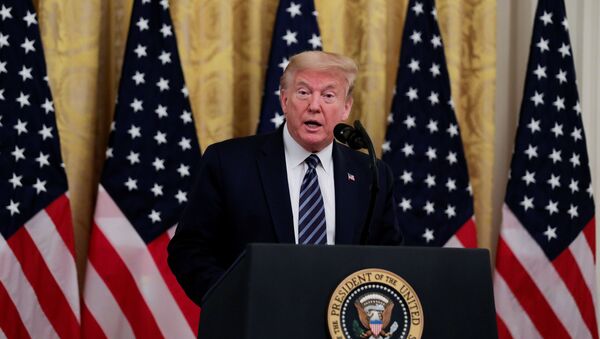 After delivering remarks on how the federal government looks to protect American senior citizens from the COVID-19 novel coronavirus, US President Donald Trump told reporters on Thursday that the Land of the Free could impose tariffs as retaliatory measures against China over the COVID-19 pandemic.

When asked if he would consider canceling US debt obligations to China as punishment over the deadly outbreak, Trump said that he could enforce tariffs instead.

"I could do it differently, I could do the same thing but even for more money, just by putting on tariffs," the president told the media during a question and answer period during the East Room event.

He also went on to question why China allowed people to leave and travel around the globe when they were aware of the respiratory illness' emergence.

Trump also confirmed to reporters that he has observed things that give him confidence that the contagious disease originated in the Wuhan Institute of Virology - a theory that goes against previous statements issued by the World Health Organization (WHO).

“All available evidence suggests the virus has an animal origin and is not manipulated or constructed in a lab or somewhere else,” WHO spokeswoman Fadela Chaib said on February 21.

"We have people looking at it very, very strongly," Trump noted. "Scientific people, intelligence people, others."

However, when pressed on his assertion, Trump claimed such findings were something he is "not allowed" to disclose.

Trump's claim just hours after a release from the Office of the Director of National Intelligence concluded that "COVID-19 virus was not manmade or genetically modified."

Trump previously announced that US intelligence officials were conducting investigations based on reports that COVID-19 made its way to the world following an accident at the Wuhan Institute of Virology.

"We’re looking at it," Trump said during a Coronavirus Task Force briefing on April 17. "A lot of people are looking at it - it seems to make sense."

When asked whether he holds Chinese President Xi Jinping personally responsible, Trump stopped short of calling out the leader specifically for the alleged misinformation that came out of the city of Wuhan regarding the novel coronavirus.

Earlier in the briefing, Trump argued that China opposes the idea of his reelection and would prefer for Democratic presidential candidate and former Vice President Joe Biden to become commander-in-chief.

The US president contended that if Biden, who he referred to as "Sleepy Joe," won the 2020 presidential election, China "would take this country for a ride like never before."

Trump also noted that the US-China trade deal was now a secondary concern to Beijing's handling of COVID-19.

The US president's claims on Thursday regarding China and Biden came after he sat down with Reuters for a Wednesday interview and claimed China “will do anything they can to have [him] lose” the upcoming presidential election.

He argued that the country "can do a lot" when it comes to reprimanding China over the novel coronavirus.

Chinese Foreign Ministry spokesman Geng Shuang has since responded to the US president's interview, expressing that Beijing does not have any interest in the US' domestic affairs and does not wish to be dragged into such matters.