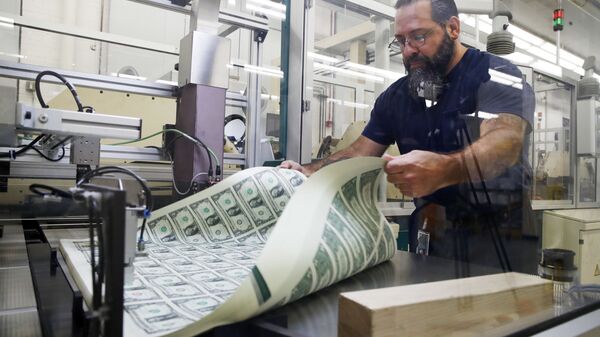 The president of the Shanghai Gold Exchange (SGE) believes that a new hard currency independent of any state is needed to develop international trade when the world enters the post-pandemic period.

According to SGE President Wang Zhenying, during the post-crisis recovery, the dollar's dominance will cause many problems for other countries due to the Fed's low-interest rate policy. He warned that following the pandemic, the world may need a new currency for settlements.

Developed countries have adopted monetary incentives to combat the economic impact of the pandemic. This largely entails cutting interest rates, which were low even before the crisis.

As a result, several EU countries and Japan have resorted to negative interest rates. Meanwhile, the US Federal Reserve System lowered the rate to 0.00-0.25. Furthermore, the US regulator allowed for a virtually infinite policy of quantitative easing aimed at supporting economic growth.

This policy makes the dollar cheaper and it creates certain problems for US trade partners working for export. This way, the US creates quite competitive conditions for its products.

However, the dollar is the global currency, and according to SWIFT, it accounts for 40% of all international settlements and 60% of foreign exchange reserves of other countries' central banks. Therefore, the Fed's monetary policy has a significant impact on financial stability in the rest of the world.

Furthermore, the US is using the dollar as an instrument of political pressure on other countries. Sanctions against Iran, for example, ban dollar settlements for oil, the country's main export commodity.

North Korea's trade partners cannot pay for metals and minerals in dollars. The United States periodically threatens to disconnect its geopolitical rivals from the international payment system SWIFT, and, incidentally, these threats have been realised with Iran.

The US easily freezes the dollar assets of other countries in case of any contradictions.

According to Wang Zhenying, quoted by Reuters, the dollar, as a weapon of US pressure and a source of vulnerability for other countries, can no longer be the standard global currency. He admits that gold is also not an ideal means of exchange, as its quantity is limited and it cannot meet the needs of growing international trade. Therefore, a supranational currency for settlements independent of any country is needed.
This idea is not something new and was already promoted by China during the last financial crisis of 2008-2009. Then Chinese central bank chief Zhou Xiaochuan proposed to reform the system of international settlements through special drawing rights (SDR).

He suggested that SDRs could become a supranational means of settlement between countries. However, the world didn't welcome this idea. The problem was that SDRs did not have enough liquidity to become a means of payment.

Moreover, even at that time, its volume did not meet the needs of international trade, the assistant dean of the Chongyang Institute for Financial Studies at Renmin University in China, Jia Jinjing, told Sputnik.

“Special drawing rights are not a means of payment. Moreover, their accumulated volumes are not significant. If all countries agreed to increase SDRs to secure enough for international trade, then this idea could still be realised. But it is very unlikely that all countries could reach such a consensus”, he said.

According to the expert, now the situation has changed. New financial technologies have appeared that would help better implement the idea of new global currencies.

“There are increasing opportunities now. The People's Bank of China has launched digital currency tests. Its difference from the traditional money is that transferring each yuan will be completely transparent. And even for some deals, it will be possible to specifically issue digital currency. With fiat currencies, such schemes are impossible. So we can use digital currency technology to create a system of international settlements according to real needs”, Jia Jinjing concluded.

The first phase of the digital yuan will focus more on domestic payments. According to the mobile interface images, the system is very similar in functionality to the Alipay and WeChat Pay electronic wallets, which are common in China.

The introduction of digital state currency will enable the amount of money in circulation to be controlled more effectively, to carry out monetary policy and regulate capital movement.

It is not certain that the digital yuan will take root as a new global payment system. For one thing, the Chinese currency is still not freely convertible; there are restrictions on capital flows.

As the head of the Shanghai Gold Exchange rightly pointed out, a currency controlled by a certain state in the current conditions of globalisation may indeed fail to cope with the functions assigned to it.

However, China is so far the first major world power to launch, albeit in a pilot mode, a national digital currency.

Global Economy Needs Alternative to US Dollar - Bank of England Governor
The Central Bank of China has registered 84 patents in this domain. They describe protocols to control the issue and circulation of digital yuan, as well as mechanisms for interbank clearing and settlements, as well as integration of crypto yuan digital wallets with the existing banking infrastructure.

According to expert Jia Jinjing, a supranational global currency for international settlements will most likely be issued in the form of electronic money. After all, this will significantly reduce transaction costs and all the difficulties associated with the storage and transportation of fiat currency.

Meanwhile, China will already have a serious technological reserve and competence to actively participate in the formation of a new international payment system.