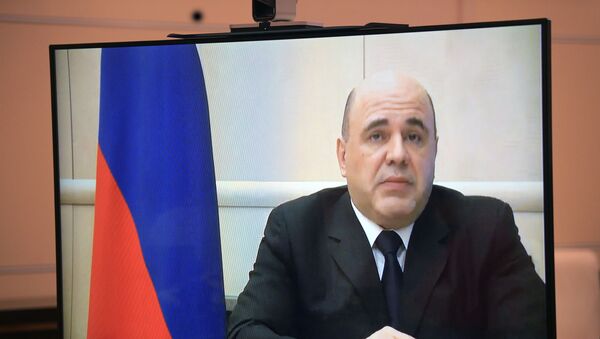 Tim Korso
All materialsWrite to the author
His first deputy, Andrey Belousov, will be filling in for him in his position, but the final decision on economic aid to Russian citizens will be cleared with the prime minister.

"In light of this situation, I would like to address all Russian citizens to take the threat of the coronavirus infection and its spread seriously. We have the May celebrations ahead of us and I urge all of you to stay home [during them] and follow all safety rules to prevent the spreading of the disease", Mishustin said.

The PM also suggested that his first deputy, Andrey Belousov, be appointed as acting prime minister until he gets well and is able to fully return to work. Putin has accepted Belousov's candidacy and wished Mishustin to get well as soon as possible.

"What happens to you right now can happen to any of us, I have always said that. […] You, your cabinet, presidential administration are in the zone of high risk [of infection]", Putin told the prime minister.

The president also announced that all crucial decisions on supporting the Russian economy during the pandemic will be cleared with Mishustin before being signed. He also thanked the prime minister for all the work he and his cabinet have done so far and expressed hope that he will be able to continue to take an active part in the cabinet's activities, despite his illness.

All members of the cabinet and administration, as well as the Russian president, undergo regular tests for the coronavirus, one of which returned positive for Mishustin today.