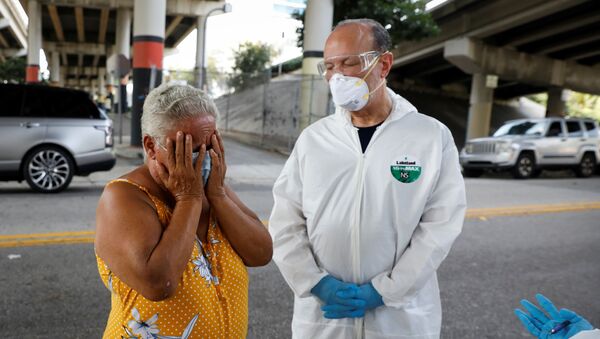 COVID-19 appeared first in China in December 2019 but spread rapidly around the world. Some countries have been more affected by it than others and their governments have reacted in different ways.

There have been 62,200 deaths in the United States and more than a million people have tested positive for COVID-19 so far.

Although the US government has managed to test more than six million people - more than any other country - President Donald Trump has come in for criticism for his mixed messaging.

Despite reports to the contrary, Sweden is paying heavily for its decision not to lockdown. As of today, 2462 people have died there, a much higher number than the neighboring countries of Norway (207), Finland (206) or Denmark (443). The United States made the correct decision!

​The Trump administration has taken a barrage of criticism from Democratic leaders, lawmakers, and much of the media in recent weeks over the federal government’s response to the coronavirus pandemic, with activists slamming the president’s scapegoating of China, his decision to cut funding to the World Health Organization and his provocative tweets in which he called on residents of several Democratic-run states to “liberate” themselves and save their Second Amendment right to bear arms amid the crisis.

Trump promised the virus would miraculously go away in April.

Today is April 30th and 60,000 Americans are dead amid his botched coronavirus response.

​Last week President Trump also found himself in hot water after he discussed the possibility of using an injection of disinfectant to cure COVID-19 during a press briefing. He later claimed he had made the suggestion “sarcastically”.

Because of the federal nature of the United States the decision to impose a lockdown is up to each of the states and there have been wild differences in the positions taken by the 50 governors.

New York state has been the epicentre, with 18,000 deaths, but the Governor of New York, Andrew Cuomo, has been getting plaudits for his assured performance at daily media briefings.

The death toll from coronavirus in the UK suddenly jumped this week when those who passed away in nursing homes were added - it now stands at 26,771.

British Prime Minister Boris Johnson was the focus of an outpouring of public sympathy when he contracted the disease and had to spend several nights in the intensive care unit of a London hospital.

As a broadcaster I’m deeply conscious of the tension between causing unnecessary & necessary alarm. I’m struggling with it. Our death toll is now, by any measure, among the very worst in the world. Quite clearly as a result of political decisions & incompetence. 1/2

​But on 19 April the Sunday Times reported that Boris Johnson had missed five crucial meetings of the Cobra committee in February as Britain “sleepwalked into disaster.”

"Our country remains extremely well prepared," lied Boris Johnson on 7 April. The lethal clown returns today. When will Britons rise against those who govern by lies and media, who bear criminal responsibility for countless deaths, who have placed a nation under house arrest?

The British government has been heavily criticised in the press and on social media for its allegedly lacklustre performance during the crisis.

Earlier this month the Health Secretary Matt Hancock promised the government would increase the number of coronavirus tests it carried out every day to 100,000 by the end of the month. But this target has been missed.

The government has also been criticised for its failure to provide sufficient PPE masks and gowns to NHS frontline staff.

Italy has been one of the countries hardest hit by the outbreak, possibly because of the high number of elderly people in the population and the Italian tradition of several generations living under the same roof.

"We will stay separated today so we can hug each other tomorrow"
-Giuseppe Conte pic.twitter.com/ZnY9V0Dxdb

​Italy was the first country in Europe to impose a lockdown - on 8 March - but on Thursday, 30 April, the Prime Minister Giuseppe Conte criticised several regional leaders for defying the government and lifting lockdown measures early.

He has been criticised for robbing Italians of their constitutional rights but he told the parliament in Rome on Thursday: "Initiatives involving less restrictive measures are contrary to national rules and are therefore to all intents and purposes illegitimate.”

Why aren’t we asking the 15,000 people a day who are still flying into the UK including from the USA, Italy and Spain to wear masks and self-isolate for at least 7 days on arrival? Why didn’t we do it weeks ago? #coronavirus

​Calabria, in southern Italy, has allowed bars and restaurants with outside tables to open to the public.

Many Italians have also been angry at the perceived lack of help they received from the European Union in the early days of the crisis in March.

Other EU member states were slow to send extra supplies of masks and other PPE equipment to Italy, despite it being the European epicentre of the outbreak.

Italy’s ambassador to the EU said on 11 March accused Brussels of dithering and said they needed to come up with “emergency actions that are quick, concrete and effective.”

Spain was hit by coronavirus much later than Italy but it now has more cases - 236,899 - although less deaths.

But the 24,543 victims represents one of the highest deaths per head of population ratios in the world - 519, beaten only by Belgium.

Spain imposed a nationwide lockdown on March 14 and on Thursday, 30 April, the Spanish statistics agency INE said the country’s economy had shrunk by 5.2 percent in the first quarter. 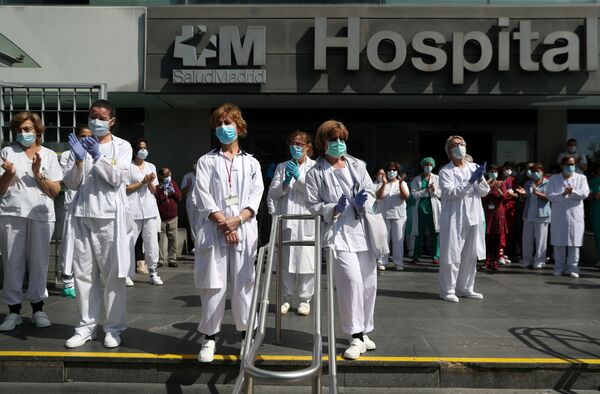 Staff from La Paz hospital applaud after a minute of silence to remember Joaquin Diaz, the hospital's chief of surgery who died of COVID-19, amid the coronavirus disease (COVID-19) outbreak in Madrid, Spain, April 20, 2020
© REUTERS / Susana Vera

Mr Sanchez, who has escaped with his political reputation relatively unscathed, said the lockdown would remain in place until 9 May.

Earlier this week his government introduced a four-stage plan for ending the quarantine and said he hoped the country would be back to normal by the end of June.

The Spanish economy relies heavily on summer tourism and it remains to be seen whether any British, German, Scandinavian or Russian tourists will be willing to risk a holiday on the Costa del Sol or the Balearic Islands.

There have been more cases reported in France - 166,420 - than across the English Channel but the death toll is slightly lower at 24,087.

On 15 March, when it became clear France was going to be badly hit by the pandemic, President Emmanuel Macron said: “We will get through this crisis by being responsible, all of us together and each one of us. Everyone should do it for themselves and the others, follow these rules.” 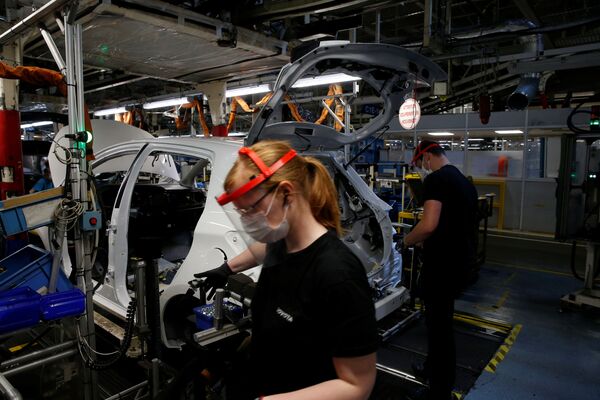 Employees wearing protective face masks work on the automobile assembly line at the Toyota Motor Manufacturing France plant as it resumes its operations after five weeks of closure during a lockdown amid the coronavirus disease (COVID-19) outbreak, in Onnaing, France, April 23, 2020
© REUTERS / Pascal Rossignol

Earlier this month a former health minister, Philippe Douste-Blazy, told Le Figaro newspaper in an interview: “While I appreciate the president’s humble approach to the crisis, I must admit that I simply do not understand his government’s health strategy.”

Mr Douste-Blazy said the virus would only vanish once “we separate the sick from the healthy”, which he said the French government strategy was failing to do.

President Macron has extended the nationwide lockdown until 11 May and says he hopes to gradually reopen daycare centres, schools and universities.

Officially China has only recorded 4,633 deaths by COVID-19, a figure which began to look highly suspicious when the death tolls in countries like Belgium and the Netherlands overtook it this month.

That amounts to only three deaths per million people and led some, including US President Donald Trump, to suggest the Chinese government had massively under-reported the casualties from the virus. 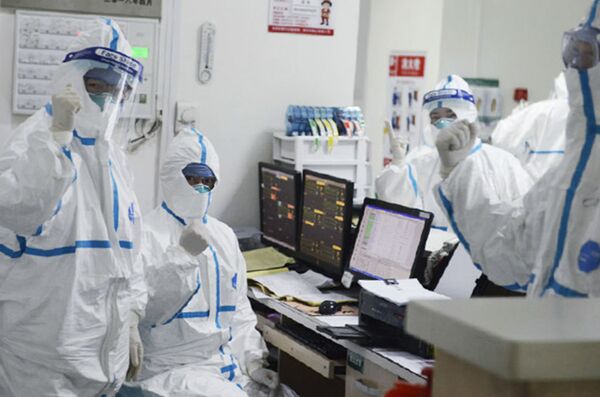 China’s Communist Party rules the country with an iron fist and does not tend to tolerate dissent or even criticism.

But there have been instances reported of demonstrations against the Chinese local or national governments.

In March a video emerged of residents of Hubei province - which was at the centre of the outbreak - apparently clashing with police oficers who were preventing them crossing into Jiangxi province.

The Brazilian President, Jair Bolsonaro, has been heavily criticised both externally and internally for his lackadaisical response to the crisis.

Brazil has had 79,685 cases of COVID-19 but only 5,513 deaths, a figure that could be attributed to the absence of a large elderly population.

The average age of the population in Brazil is 31, compared to 45 in Italy.

When Brazil’s death toll overtook China’s this week, President Bolsonaro was asked about it by reports and replied: "So what? I am sorry. What do you want me to do?''

Mr Bolsonaro’s laissez-faire reaction is worrying some of his Latin American neighbours, who fear Brazilian construction workers, truck drivers and tourists might spread the virus.

Argentina’s President Alberto Fernandez, a leftist whose world outlook is very different from Bolsonaro’s, said: "Brazil worries me a lot. A lot of traffic is coming from Sao Paulo, where the infection rate is extremely high, and it doesn't appear to me that the Brazilian government is taking it with the seriousness that it requires. That worries me a lot, for the Brazilian people and also because it can be carried to Argentina.''

Germany has tested 2.5 million people - more than any other European country except one - Russia. 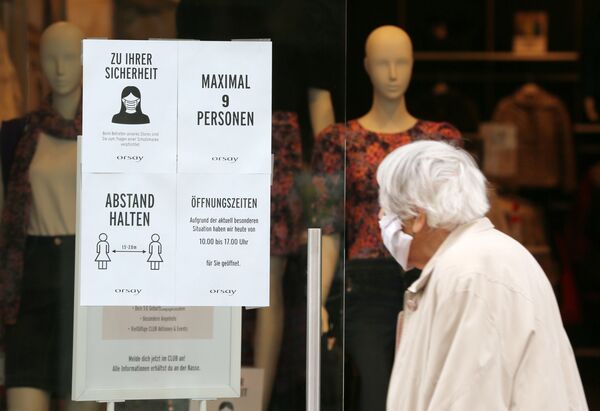 A sign with distancing rules and the notice that masks must be worn, is seen at the entrance of a shop, as the spread of the coronavirus disease (COVID-19) continues in Erfurt, Germany, April 24, 2020.
© REUTERS / XXSTRINGERXX xxxxx

The German government’s response has been held up as a template by many of their European neighbours, especially by the British press.

Germany began easing its lockdown last week when some shops were allowed to open if they practised social distancing.

But the Chancellor, Angela Merkel, is worried about a second wave

Lothar Wieler, president of the Robert Koch Institute for infectious diseases, told a news conference this week: "I can only warn you all not to be too lax with this virus, not to underestimate it. This virus has a number of characteristics that I do not want to expose to anyone - neither to myself nor to my children, to put it bluntly.”

Before a high level meeting on Thursday, 30 April, Mrs Merkel’s chief of staff, Helge Braun, said the government would wait until 6 May for data on what effects easing the lockdown have had before moving again.

The South Korean government has tested 619,881 people - much more than France - and only 10,765 of them had the coronavirus. 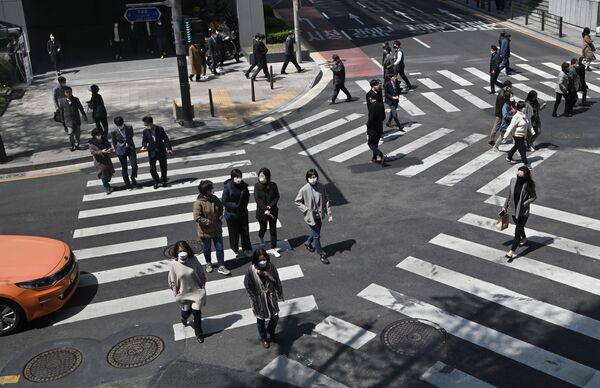 That high level of testing, and the fact that many people were tested early in February or March, has meant South Korea has only recorded 247 deaths despite being extremely close geographically and in terms of trade movements to China, the original epicentre.

South Korea’s government has been praised for its success in controlling the virus and on Thursday, 30 April, the country reported zero new infections for the first time since mid-February.Welcoming the milestone, President Moon Jae-in said: "This is the strength of South Korea and its people.”