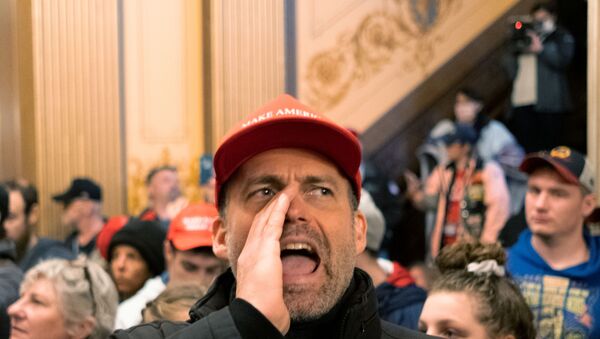 WASHINGTON (Sputnik) - Hundreds of protesters including some bearing firearms rallied inside the state of Michigan's Capitol building in Lansing on Thursday to protest against the coronavirus lockdown measures imposed by Governor Gretchen Whitmer, verified videos and photographs from the scene showed.

State police were protecting the building and trying not to allow the protesters to gain access to the House floor, according to images and videos posted by activists on Twitter.

CURRENT SITUTATION: Michigan Protestors are outside their state capital chanting “let us in”, backed by thousands more outside the capital building.. #openMichigan pic.twitter.com/Il2kYv7CeG

State Police standing in a line to block protesters who apparently want to go into the House chamber: pic.twitter.com/1mHmYB8wo4

The Legislature at the time was debating whether to extend the governor's state of emergency.

Crowd was chanting “vote no” on extending what a speaker described as “the shutdown.” pic.twitter.com/VeeayGfWNd

A police spokesman told NBC News that it is legal in Michigan to bear arms, so long as the weapons are visible and all other laws are obeyed.

Police and staff aren’t engaging w/ protesters and the crowd is angry pic.twitter.com/2OOJC7eQl2

On 23 March, Whitmer issued a "Stay Home, Stay Safe" executive order, which prohibits local residents from leaving their homes for work unless designated as "critical infrastructure" workers and banned public gatherings and visits to local hospitals, malls or restaurants.

Whitmer then extended the executive order until the end of April. Although lockdowns, quarantines, and states of emergency were declared and repeatedly extended in dozens of countries and regions worldwide, even in those with far less COVID-19 victims than in the US, Michigan residents viewed the governor's order as being excessive.

President Donald Trump has been advocating for states to reopen their economies and made a call-to-action earlier in April after he said that the states of Minnesota, Michigan, and Virginia must be "liberated" from restrictions imposed by their Democratic governors. Medical experts for their part have been arguing that the economy should be reopened only after expanding testing capabilities across the country.