Wild But Tasteful: UFC Star Paige VanZant’s Hubby Reveals Why They Decided to Get Naked 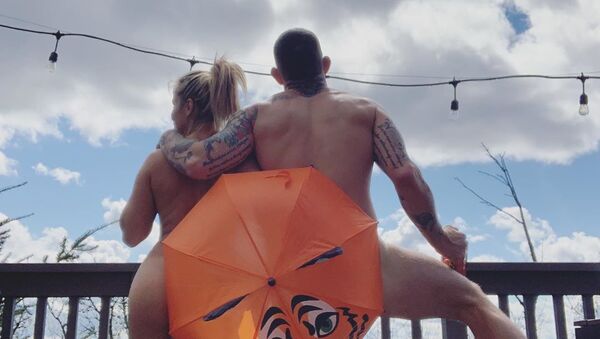 By now, most can agree that self-isolation is nothing but torture. While some of us have managed to adapt to the new reality of working and studying from home, others, like athletes whose lives depend on interaction with others, have had to find other ways to cope with the terror of “house arrest”.

Austin Vanderford, an MMA fighter and husband of UFC star Paige VanZant, has revealed why the couple has been posting nude photos of themselves during the lockdown. The 30-year-old said that he and his spouse decided to have a bit of fun during isolation. "It has got a bit wild at times, but we have been making it tasteful on social media", said Vanderford, who performs in the welterweight division.

At the beginning of April, Paige VanZant delighted 2.4 million followers on Instagram after she uploaded a series of photos showing herself and her hubby gardening, cooking, doing workouts, and relaxing… completely naked. However, the couple covered their modesty with different items, which made the photos look quite funny.

Austin Vanderford noted that not wearing clothes is normal and quite comfortable for him and his wife. "I am from the countryside in Alaska. I would say 90 percent of my life I have not had clothes on. Going wild and naked in the wilderness is where I feel the most comfortable. Paige is very comfortable in her skin, too and was photographed for the Sports Illustrated swimsuit issue in 2019", the athlete told The Telegraph.

Besides posting revealing photos with her hubby, Paige VanZant joined the list of celebrities who use the Community app to interact with their followers. The UFC star recently shared her number and promised to reply to everyone who texts her. The athlete revealed that she was inundated with messages and had lots of fun chatting with followers, "minus the three *d**k pics" that she received.