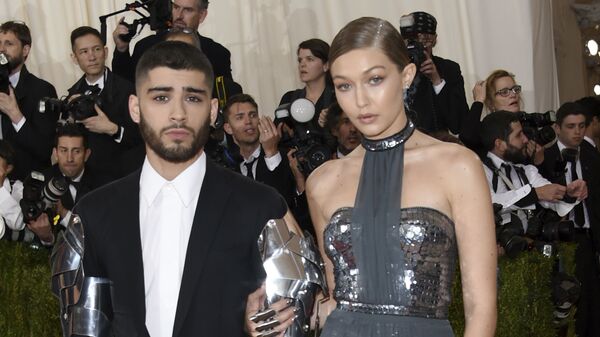 © AP Photo / Evan Agostini
Subscribe
International
India
Africa
New Delhi (Sputnik): Gigi Hadid and Zayn Malik, who have been dating on and off since 2015, resumed their relationship earlier this year.

Supermodel Gigi Hadid and pop singer Zayn Malik may have given the currently stressed world a reason to rejoice, after reports of them expecting their first baby began making the rounds on social media. Gigi is reportedly in the initial weeks of her pregnancy.

At present, they have not revealed anything about their rumoured pregnancy on social networking platforms, but citing “undisclosed sources”, international media has reported that the couple has restricted the news only to family and close relatives.

The news jolted netizens into immediate heartbreak. Whereas one part of Twitter is crying over their celebrity crushes “slipping further away from them”, the other section of the micro-blogging platform is gushing over how beautiful and lucky the baby will be.

#ZaynMalik and #GigiHadid are trending hashtags on Twitter in India.

Waking up to the news of #ZaynMalik and #GigiHadid expecting their first - I know for a fact -- beautiful baby togther!!

Zayn and gigi expecting a baby

imagine having gigi as ur mom, zayn as ur dad, bella kendall and hailey as ur aunts and one direction as ur uncles.. #GigiHadid #ZaynMalik pic.twitter.com/mwX0btiwn5

​Just lask week, Gigi turned 25 and celebrated her birthday with 27-year-old Zayn along with her sister Bella Hadid – who herself is also a Victoria’s Secret supermodel.

Gigi, who otherwise does not often indulge in public displays of affection (PDA), posted glimpses of her private birthday party on Instagram.

Had the sweetest day celebrating my 25th birthday with my quarantine family, who made it so special for me, along with all the love I felt from all over the world! Thank you to everyone for the birthday messages, I carried you with me yesterday!! 💛🙏 I am grateful and lucky that my family and friends -near and far- are healthy and safe, and although I missed loved ones I wish I could have celebrated with, know that these times will make us even more grateful for togetherness to be had in the future ! I will never forget my 25th bday! +++The icing on the perfect quarantine bday was finding out my surprise everything-bagel-cake was made by the one and only Cake Boss @buddyvalastro who I have watched for over a decade. I CRIED REAL TEARS! BUDDY! This is a dream come true. I can’t believe you made this cake for me while the bakery is closed. It means more to me than you know, and when we hopefully meet some day you will truly know that there almost isn’t an episode I’ve missed. 10/10 would be a Carlo’s intern whenever needed. 😆 Grateful, honored, your biggest fan. 🥯🥯🥯🥯🍰

Netizens were quick to observe the blue and pink ribbons tied to the balloons – and one picture where the couple is hugging each other shows a blue ribbon tied on Gigi’s hand. Netizens think it’s a boy they’re having, but are still waiting for an official confirmation.

Notice the pink and blue cords ? And they posted the picture with the blue one . A boy ? 💙🥺 #ZaynMalik #GigiHadid #Zigi
Ps: But still lets wait for them to confirm☺️ pic.twitter.com/gWYh13bo9z

​The last time the world reacted to pregnancy news like this was when one of Gigi's friends, the world’s youngest billionaire and beauty mogul, Kylie Jenner welcomed her child with rapper/singer Travis Scott in 2018 – when Kylie was 20 and Travis was 25 years old. The couple had kept their pregnancy a secret until their daughter Stormi finally arrived.