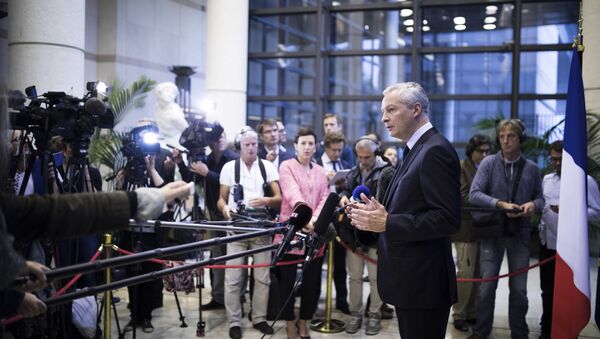 Speaking on La Chaîne Info, French Finance Minister Bruno Le Maire has vowed to "tighten control" on investments flowing into local firms from outside the European bloc until at least the end of this year. Le Maire announced a lowering of the threshold of foreign investments to domestically operating firms from 25 percent to 10 percent.

"Biotechnology companies, for example those working on a vaccine against COVID-19, will also be included in this decree on foreign investments in France", the minister pointed out.

Separately, he touched upon the issues France's Airbus is currently facing, going on to note that Air France KLM "should continue to be a good customer of Airbus".

Airbus reported 481 million euros in losses in the first quarter. It has put thousands of workers on furlough, and sought billions in loans to survive the coronavirus crisis, with its CEO Guillaume Faury saying Wednesday that the aviation industry's unprecedented - "gravest ever" troubles - caused by lower air travel brought about by the coronavirus, are still at an "early stage". Faury admitted it would take a long time to persuade customers to get back on planes even after the crisis ends.

The spread of the coronavirus has overwhelmed healthcare systems resulting in a massive economic downturn, with businesses and industries brought to a halt for at least a month, amid across-the-board lockdowns and self-isolation measures needed to prevent the novel virus from spiralling out of control.

France, Italy, and Spain - the most corona-hit states in the EU - and several other countries have suggested EU nations could jointly source money to reverse the downturn and help stimulate a rebound. The sums, as was proposed, were to be paid back later. Nevertheless, these so-called "coronabonds" have been flatly rejected by Germany, the Netherlands, and a number of other states.