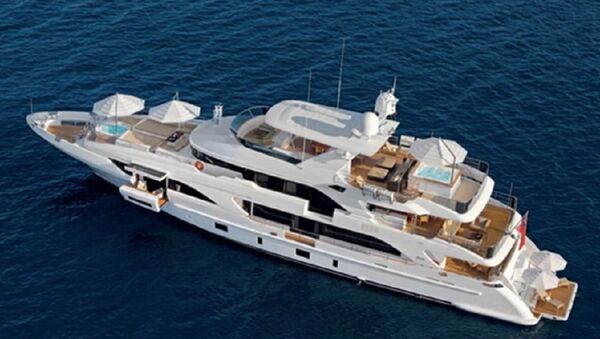 © Photo : Instagram/jameseditioncom
Subscribe
While the economy crashes and tens of millions of Americans lose their jobs, the billionaire class in the US is seeing its wealth skyrocket thanks to the CARES Act government bailout, Alan MacLeod, author, journalist and media analyst and a member of the Glasgow University Media Group, told Sputnik on Tuesday.

A new report by the Institute for Policy Studies has found that between March 18 and April 10, the collective wealth of American billionaires increased by $282 billion, or 9.5%. The country’s richest have continued to become richer as tens of millions of Americans lose their jobs, and the US gross domestic product will shrink by 40% this quarter, according to a report by CNBC.

The findings also noted the tax obligations of America’s billionaires contracted by 79% between 1980 and 2020. While US billionaire wealth has increased by 1,100% in the last 30 years, median household wealth has only increased by a measly 5%.

“The economy is completely tanking,” MacLeod told Political Misfits hosts Jamarl Thomas and Bob Schlehuber. “Everybody knows it. All sorts of businesses are going under. And yet, the super wealthy, the billionaire class, are actually seeing their wealth skyrocket right now,” MacLeod said, noting the increase was “more than all the billionaires in America put together had in 1990.”

“It’s because this bailout that’s just happened, the CARES Act is a huge giveaway to the super wealthy. So 82% of the tax cuts actually went to people who were making more than $1 million a year. When you drill into that, people who are actually making more than $1 billion, are getting the lion’s share of this tax cut. We really have a situation again where we could be putting two and two together and saying … the super wealthy are getting much richer,” MacLeod said.

The increase in billionaire wealth comes as 26.5 million Americans filed for unemployment in the last five weeks and as more than 50 million Americans deemed “essential workers” risk their lives to continue working to provide services to people.

The Coronavirus Aid, Relief, and Economic Security (CARES) Act is a $2 trillion bill signed into law by US President Donald Trump on March 27. The purpose of the act is to deliver “on the Trump administration’s commitment to protecting the American people from the public health and economic impacts of COVID-19,” according to the US Department of the Treasury.

According to a report by Forbes, there are “provisions tucked away into sections of the CARES Act” to provide tax cuts to wealthy Americans.

Sections 2303 and 2304 of the law would allow wealthy taxpayers to deduct losses from 2018 and 2019 tax years and “claim exorbitant refunds,” Forbes explained. An analysis by the US Congress Joint Committee on Taxation (JCT) reveals that these measures would allow around 43,000 wealthy Amerians to receive “average tax windfall of $1.6 million each,” the outlet reported. In addition, the provisions allow wealthy taxpayers to keep benefits from “maintaining payroll and supporting workers.”

In an April 24 release, US Senator Sherrod Brown (D-OH) revealed proposed legislation that “would do away with provisions in the Coronavirus Aid, Relief, and Economic Security (CARES) Act that the nonpartisan JCT estimates will cost $195 billion over ten years, and that would overwhelmingly benefit wealthy taxpayers like hedge fund managers and real estate speculators,” according to a statement from his office.