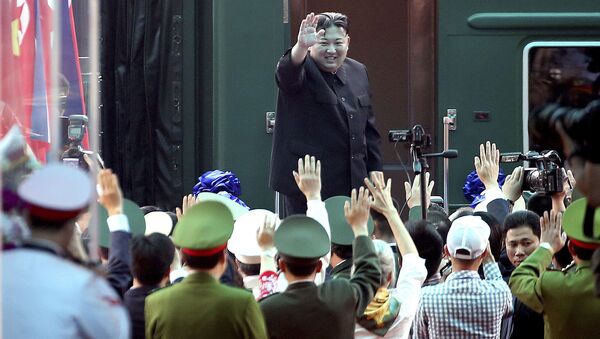 © AP Photo / Minh Hoang
Subscribe
Rumours about the North Korean leader being in a coma or even passing away emerged last Saturday, but one thing is certain: it’s actually not the first time that 36-year-old Kim Jong-un has “died,” with the main intrigue being not the trustworthiness of the claims, but how things would play out should it really be the case.

On 11 April it first emerged that Kim Jong-un had dropped out of sight, with the South Korean media outlet Daily NK reporting that the politician had undergone heart surgery purportedly due to his obesity, stress and excessive smoking. The starting point of the rumours that he could be unwell was 15 April, when Kim Jong-un appeared to be absent from the landmark Day of the Sun celebrations, which honoured Kim’s grandfather and DPRK founder Kim Il-sung.

The Japanese weekly magazine Shukan Gendai went still further reporting that the North Korean head of state is in “vegetative state”, citing a Chinese medic sent to North Korea as part of a team to treat Kim as saying that a delay in a simple stent procedure left the leader seriously ill.

No Confirmation From Any Authorities

Konstantin Asmolov, an academic at the Institute of the Far East of the Russian Academy of Sciences, has drawn attention to the fact that no authorities whatsoever have  even anonymously confirmed the reports.

“He has for some time been out of the public sight, there are no new pictures of him. He might have been unwell, but it doesn’t mean death or a coma,” Asmolov said.

The expert notes that should a real emergency occur, the streets of Pyongyang would likely see [military] equipment, and the capital would hear rumours spreading, including in diplomatic  circles.

Evgeny Kim, another academic at the Institute of the Far East, believes that whatever happens, North Korea is unlikely to be de-stabilised.

“The Politbureau will set up a meeting, make decisions and issue orders. One shouldn’t think that they will lose control over the state,” he explained adding the political system is built there in such a way that the leader’s temporary absence wouldn’t affect stability. “When in 2008 Kim Jong-il was out of public sight for four months, everything was good with the country’s management, with the work on the nuclear arsenal proceeding.”

Evgeny Kim noted that Pyongyang well remembers the plan agreed on by South Korea and the US, which stipulates the deployment of joint personnel in the event of the emergency in North Korea. "China, which sees North Korea as a buffer zone protecting it from Americans, will never let North Korea collapse. The same applies to Russia, as we also border with North Korea," the expert said.

Meanwhile, the hashtag #KimJongUndead shortly became trending on Twitter over the past weekend, amid widely circulated speculations on who would take over power should anything indeed happen to Kim Jong-un.

For instance, the Japanese newspaper Yomiuri Shimbun reported last week, citing sources familiar with trilateral discussions between South Korea, the US, and Japan, that North Korea has been drawing up a contingency plan overseeing the transfer of power to Kim Jong-un’s younger sister, Kim Yo-jong. Kim Yo-jong, allegedly four years younger than her brother, was reported to have been prepared for the post, while she was steadily rising up among the ruling Workers’ Party ranks.

The reports about the plan came a day after CNN reported citing an anonymous US government source that the US is currently digging into "intelligence" that DPRK leader Kim Jong-un is in "grave danger" following his reported 12 April cardiovascular surgery.

No open administration sources around the world, including in North Korea, have so far confirmed any of these reports, with South Korean Unification Minister Kim Yeon-chul suggesting that Kim’s escape from the public eye - at least on two occasions - may have something to do with the raging coronavirus crisis.

Donald Trump, who had personally seen Kim Jong-in more than once, earlier hit back at the rumours of his counterpart’s demise arguing that none of them has been confirmed.

In 2014, the North Korean leader is known to have been missing for 40 days. During that time, he reportedly underwent a leg surgery either due to excessive weight or a trauma, later appearing in public with a cane.

Earlier, in 2012, social media chewed over reports that on 11 February he was allegedly attacked in the North Korean embassy in Beijing, with prominent media upholding the claims, albeit with a number of reservations.

000000
Popular comments
These are useless speculations, obviously the NK government will not fall because the same government has been in power for many decades fighting imperialist aggression with challenges of famine and shortages all along the way. You may not like the system you may not like the leader but tough nookies, they are there to stay because it is the Americans who created them by trying to obliterate NK sincWW2
feketehollo
28 April 2020, 21:23 GMT3
000000
As strange as it may sound, in the enlightened land of the USA, were the Stable Genius to fall off the perch, I could only imagine wild (joyful) celebrations. It would most likely also apply to quite a few more fellow megalomaniacs.
Freedom_Gazz
28 April 2020, 22:41 GMT2
000000
Newsfeed
0
New firstOld first
loader
LIVE
Заголовок открываемого материала
Access to the chat has been blocked for violating the rules . You will be able to participate again through:∞. If you do not agree with the blocking, please use the feedback form
The discussion is closed. You can participate in the discussion within 24 hours after the publication of the article.
To participate in the discussion
log in or register
loader
Chats
Заголовок открываемого материала
Worldwide
InternationalEnglishEnglishMundoEspañolSpanish
Europe
DeutschlandDeutschGermanFranceFrançaisFrenchΕλλάδαΕλληνικάGreekItaliaItalianoItalianČeská republikaČeštinaCzechPolskaPolskiPolishСрбиjаСрпскиSerbianLatvijaLatviešuLatvianLietuvaLietuviųLithuanianMoldovaMoldoveneascăMoldavianБеларусьБеларускiBelarusian
Transcaucasia
ԱրմենիաՀայերենArmenianАҧсныАҧсышәалаAbkhazХуссар ИрыстонИронауОssetianსაქართველოქართულიGeorgianAzərbaycanАzərbaycancaAzerbaijani
Middle East
Sputnik عربيArabicArabicTürkiyeTürkçeTurkishSputnik ایرانPersianPersianSputnik افغانستانDariDari
Central Asia
ҚазақстанҚазақ тіліKazakhКыргызстанКыргызчаKyrgyzOʻzbekistonЎзбекчаUzbekТоҷикистонТоҷикӣTajik
East & Southeast Asia
Việt NamTiếng ViệtVietnamese日本日本語Japanese俄罗斯卫星通讯社中文（简体）Chinese (simplified)俄罗斯卫星通讯社中文（繁体）Chinese (traditional)
South America
BrasilPortuguêsPortuguese
NewsfeedBreaking
05:29 GMTRussia’s Ruling Party Ahead in Parliamentary Vote With Over 48%, Election Commission Says
04:34 GMTLive Updates: UK PM Johnson to Push Joe Biden to Lift COVID-19 Travel Ban With US
04:30 GMTNot in the Mood: Golden Retriever Does Not Want to Cuddle
04:28 GMTChinese Observers Give Positive Assessment of Russian State Duma Election
03:45 GMTMusk Adds Another Joke to Joe Biden’s ‘Sleepy’ Issue, When Asked About ‘Inspiration4’ Flight
03:16 GMTKhamenei Appoints New Head of Iranian Air Force
03:16 GMTWait, Again? New Photo of Trudeau Wearing Blackface Emerges on Social Media
02:41 GMT‘Duty of Care’: Texas Doctor Performs Abortion Past 6-Week Law to Protest State’s ‘Heartbeat Bill’
02:02 GMT'Get Off Back Foot': Prince Andrew Mulls Dismissing His Legal Team Over Reputational Damage - Report
01:48 GMT'The Crown' Wins Emmy for 2021 Best Drama Series
00:53 GMTWHO Appoints Former UK Prime Minister Gordon Brown as Health Financing Ambassador
00:45 GMTIran Says Ready to Sell Fuel to Lebanese Gov't After Hezbollah Secured Emergency Supplies - Report
00:38 GMTVideos: Volcano Eruption on Spanish Island of La Palma Forces 5,000 to Evacuate
00:25 GMTNetanyahu on Facebook Mocks Biden’s Alleged Nap During Talks With Israeli PM Naftali Bennet
Yesterday‘Crisis Crisis’: Trump Says US Becoming ‘Cesspool of Humanity’ Over Border Situation
YesterdayFBI: Human Remains Found in Wyoming 'Consistent With Description' of Missing Gabby Petito
YesterdayFrance-UK Defense Minister Meeting Canceled Over AUKUS Fracas - Report
YesterdayFrench Highliner Stops Parisians’ Hearts Crossing Seine 200 Feet Up
YesterdayUnited Russia Leads in Russian General Election With 42% of Vote
YesterdayCelebs Go Skating Host Hopes to Sign Prince Harry & Meghan Markle for the Show, Media Says