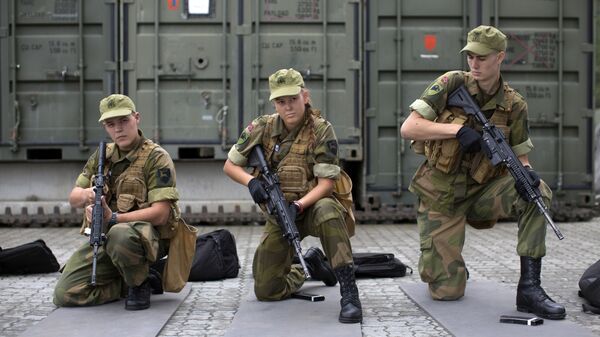 © AFP 2023 / Kyrre Lien
Subscribe
International
India
Africa
While noting an improvement from the 2017 situation, which he himself described as “terribly poor”, Haakon Bruun-Hanssen stressed a lack of personnel and military equipment.

In his recent annual report, Norwegian Defence Chief Haakon Bruun-Hanssen focused on the clear limitations to the Armed Forces' preparedness and ability to manage operations in times of crisis and war.

Bruun-Hansen noted a “low volume of personnel and defence material”, which undermines readiness. The staffing in various departments is too low for sufficient endurance in times of crisis, national broadcaster NRK reported.

Still, he noted an improvement compared with 2017, when the current long-term plan was launched. Then, he described the emergency preparedness as “terribly poor”. Most depots were cancelled, the stock of spare parts was too small, the backlog of maintenance massive and the manning too low to ensure sufficient endurance and robustness, he summarised.

“Significant strides have been made in the last three years to improve preparedness”, Bruun-Hanssen said. “We see signs of things getting better. But there is still some distance to the level we think it should be. Preparedness needs to be further improved,” he stressed.

Despite the gradual phasing in of F-35 fighter jets and surveillance aircraft, the heavily delayed NH 90 helicopters and the loss of the frigate Helge Ingstad, which sank following NATO drills in late 2018, are still bogging the Norwegian defence down.

Bruun-Hanssen's summary is that the Armed Forces are able to fulfil their mission, but are entirely at the margins of capacity in several areas. Therefore, their operational ability and preparedness are considered “less good”.

Torbjørn Bongo, the head of the Norwegian Officers' Association (NOF), describes the commander's judgment as “clear, but honest”.

“I'm not surprised. This is something the Chief of Defence has communicated repeatedly over several years already, that we have a challenging situation. It is a picture that both we and the staff recognise ourselves in,” he said. “There are still a number of shortcomings in the Norwegian defence that obviously need to be rectified.”

'Unrealistic': Norway's New Defence Plan Roasted Despite Meeting NATO's Demands
Earlier this month, the Norwegian government presented its long-term plan for the Armed Forces' development, which many professionals slammed as “unrealistic” as it required a lot of so-called efficiency cuts. Bongo ventured it could actually lead to an opposite effect, weakening the defence instead of strengthening it.

According to Bruun-Hansen, Norway's security picture went from being defined by the threat from the so-called “Caliphate” that Islamist extremists built in swaths of Syria and Iraq to being defined by Russia he described as “more aggressive and assertive” following the 2014 re-unification with Crimea, which the Norwegian establishment and top brass see as “annexation”.

“Increased Russian and Allied activity in our neighbourhood has challenged our ability to carry out the necessary surveillance, establish sovereignty, and exercise authority”, Bruun-Hansson summarised.

The Norwegian Armed Forces consists of four branches (the Army, the Navy, the Air Force, and the Home Guard) as well as several joint departments, and packs a peace-time force of 23,000, as well as some 40,000 reserve personnel.