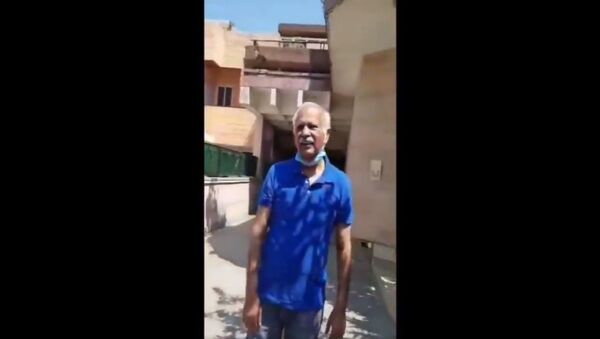 New Delhi (Sputnik): Many senior citizens in the country are going through depression during the COVID-19. The situation is worse for those living alone. A video of a teary-eyed old man encapsulates the bottled-up emotions of many senior citizens who are away from their family, especially on special occasions like birthdays.

Police knocking at the door is not usually a pleasant experience for anyone. But the expression of an old man in India who came to answer the door-bell perfectly captures that. When he introduced himself to the police and mentioned that he lives alone in the house, he was taken by surprise when the police suddenly burst into a birthday song for him with a cake in their hands.

The video, which has garnered 4,200 views, shows the old man turning away from the police to hide his emotions as they ask him to cut the cake. “We are like your children,” a policeman can be heard saying in the background while comforting the old man.

​At last, the senior citizen dons the birthday cap and cuts the cake as the police sing the birthday song. The incident took place in Panchkula region in Haryana.

The COVID-19 lockdown in India has been extended from 15 April to 3 May by Indian Prime Minister Narendra Modi due to increasing cases of infection in the country. The shutdown has also impacted senior citizens who are a high-risk category and compelled them live inside until the pandemic subsides.