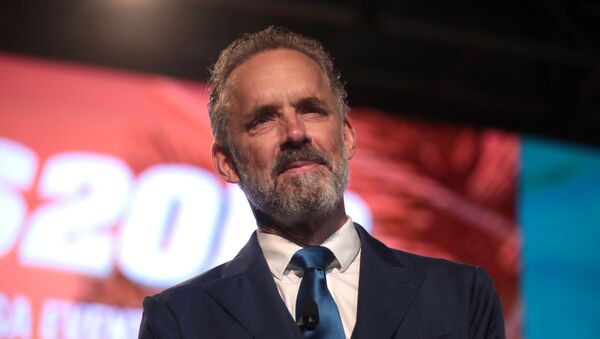 CC BY-SA 2.0 / Gage Skidmore / Jordan Peterson
Subscribe
Canadian psychologist Jordan Peterson is currently in the process of recovery following the detox treatment he underwent in Russia to battle a physical addiction to the prescribed drug benzodiazepine. But it seems that Petersons' philosophy does not require his public presence to still have a huge and long-lasting impact on his followers’ lives.

Political commentator and TV show host Dave Rubin revealed during a recent episode of “The Ben Shapiro Show: Sunday Special” what his friendship with Canadian psychology professor and public speaker Jordan Peterson has taught him. Speaking to the show’s host Ben Shapiro about the lessons he described in his upcoming memoir “Don’t Burn This Book” and his close-knit relationship with Peterson in particular, Rubin recalled a moment when the psychologist learned about his wife’s diagnosis during a tour of his own best-selling manifesto “12 Rules for Life”.

“We found out in the middle of the tour that his wife had what they thought was terminal cancer — thank God it turned out not to be terminal, and she’s actually doing much better”, Rubin revealed during the show.

“Try and imagine this guy who was a mild-mannered psychologist and professor, who suddenly became the world’s father in a way, really the pre-eminent public thinker of our time”, he noted while recalling the professor’s rise to international prominence.

“All of those things, living through all of that and then thinking his wife is going to die. We were at lunch, at a steakhouse of course, when he got the call about his wife. I saw this man live through something unbelievably, extraordinarily horrible — or as he would say ‘brutal’ — and always put his best foot forward”, the political commentator then argued.

According to Rubin, it is this resolve and the way Peterson never breaks “one of those rules” set in his “12 Rules for Life Book” that he has taken from the Canadian professor.

“I saw him just trying to be true, and if he gave me anything, through osmosis or accident, it’s that”, the guest explained during the interview. “I am really really trying to do that. It does not mean that I do it every moment of every day but I try to incorporate those ideas those rules in just being with someone..”.

Rubin’s story was also a response to Shapiro’s question about how Peterson was feeling following his detox treatment in Russia last year, which he had to undergo after he developed a physical addiction to the psychoactive drug benzodiazepine. The psychologist was prescribed the medicine to treat anxiety, which apparently worsened after his wife was diagnosed with cancer in the summer.

“He has got something to deal with right now and I have no doubt that he will deal with that and he will be back”, Rubin reassured.

During the interview, “The Rubin Report” host also reminisced about another memorable episode connected with Peterson, the one linked to the professor’s emphasis on the importance of dressing up well. Rubin recalled that when the two friends were touring in Sweden, he walked into a shop and accidentally overheard a conversation between a cashier and a young man, who was going to buy a suit for the first time in his life in order to go to Jordan Peterson’s lecture, as the professor is well known for his style and a good choice of attire.

Social Justice Warriors are Rushing to Attack Jordan Peterson at His Weakest, Friend Says
“I thought, this is absolutely incredible”, he noted. “[He’s] buying the first suit of his life so that he can present himself in a responsible way, to go to an event to hear how he can further fix his life”.

Jordan Peterson, who later on Twitter described the episode of Shapiro’s podcast as “comments from good friends”, is currently staying in Florida. He has recently teased his fans with a glimpse at his upcoming follow-up book, which will be titled “Beyond Order: 12 More Rules for Life”.