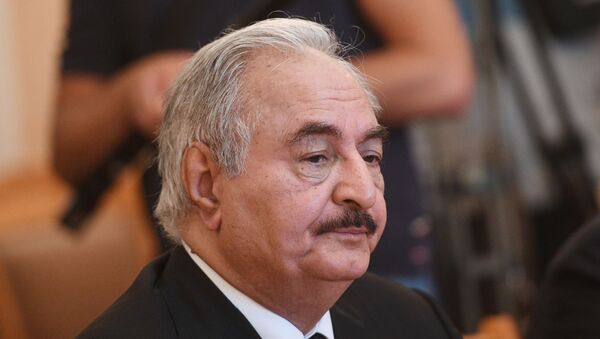 © Sputnik / Vladimir Astapkovich
/
Go to the photo bank
Subscribe
BENGHAZI (Sputnik) - The Libyan National Army (LNA) is withdrawing from the 2015 Skhirat Political Agreement, which led to the formation of the rival Tripoli-based Government of National Accord (GNA), LNA’s Field Marshal Khalifa Haftar said in an address to the nation on Monday, adding that this 'suspicious' deal destroyed the country.

On Thursday, Haftar urged Libyans to reject the Skhirat agreement. On Friday, Aguila Saleh, the speaker of the eastern-based Libyan parliament, which supports the LNA, put forward a road map outlining a Libyan political settlement, offering to form a presidential council and a commission charged with drafting a constitution.

"We have followed your response to our call to announce the withdrawal from the suspicious political agreement, which has destroyed the country, and to mandate the ones you see to rise to power … At this time, we are proud that Libyans have tasked the LNA’s General Command with a historic mission in these exceptional circumstances to stop work within this political deal and make it a part of history", Haftar said.

Meanwhile, Libya's Government of National Accord urged lawmakers of the parliament in the country's east to take its side after the Field Marshal's announcement.

The GNA said Haftar’s latest announcement "should convince everyone that an end should be put to his rebellious project". “In this regard, we urge all members of the House of Representatives to join their colleagues in Tripoli, begin a comprehensive dialogue and continue the democratic path leading to a comprehensive and lasting solution through the ballot box”, the GNA added.

The Libyan Political Agreement on the settlement of the internal conflict was signed in Morocco’s Skhirat under the auspices of the United Nations on 17 December 2015. The main point of the document, which took 14 months to coordinate, dealt with the formation of an interim Government of National Accord, which was meant to operate during a transitional two-year period.

New parliamentary elections were also promised in the deal, but they never came to pass.

Libya has been torn apart between the two rival governments for years since the assassination of the country’s long-time leader Muammar Gaddafi in 2011. Tensions escalated last year after the Libyan National Army began its operation to retake the capital of Tripoli, where the rival Government of National Accord is seated.