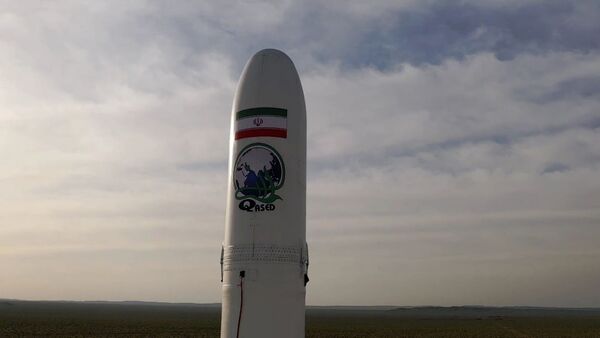 In a breakthrough for the Iranian space programme, on Wednesday Iran lauched its first military satellite, developed by the Islamic Revolutionary Guard Corps (IRGC) and expected to alter the regional balance of power.

On Saturday, US Chief of Space Operations Gen. Jay Raymond tweeted that the recently launched Iranian satellite Noor-1 is "a tumbling webcam in space", which is "unlikely" to provide any useable intelligence data.

Raymond's tweet, however, has been ridiculed by netizens, who mocked the American under the hashtag "#spaceishard".

​Some users argued that Raymond's comment is a sign of "denial" that non-Western countries are capable of achievements in their space programmes.

And what proves your claim, I swear the west is in denial that other countries are capable and aren't from the west. Whatever Iran, China or Russia does it seems you the west is always trying to degrade accept the fact that they accomplished something ffs.

​"Space is hard" is a quote from NASA's space program ads, but also a catch phrase for every time something goes wrong.

#spaceishard from a general
what is he twelve ?
that isn't an assessment.

#spaceishard
Then the Dragons came

​Some came up with their own memes for the situation.

lran launched its first military satellite 'Noor-1', which means "Light" in Persian, on Wednesday, and it has been successfully placed into an orbit about 425 kilometres above the Earth's surface. The launch came after several unsuccessful attempts to put a Zafar satellite into orbit aimed at gathering data on earthquakes and natural disasters.

US President Donald Trump tried to downpay the significance of the launch, while his appointed Secretary of State Mike Pompeo tweeted that he had found the launch "deeply troubling".