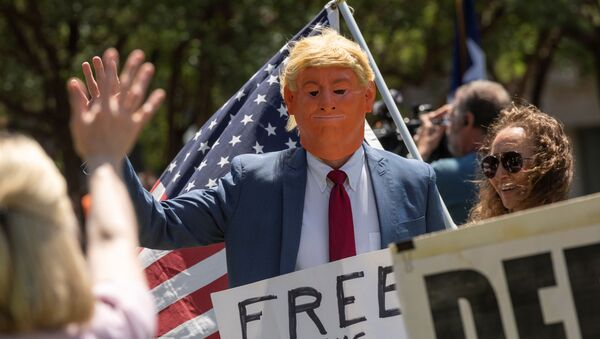 When something goes wrong, apparently a good strategy is to call it 'sarcasm'. Earlier on Sunday, Trump posted three tweets insisting that there is 'Noble Prize' and that journalists he does not like have been wrongly awarded with it, receiving enormous waves of criticizm - like his "sarcastic" suggestion to inject disinfectants to treat COVID-19.

US President Donald Trump released yet another explanation for his "sarcasm" on his earlier "Noble Prize" tweet, claiming that he did not make any spelling or factual mistakes, but intentionally used the word "noble", and actually intended to mean "having or showing fine personal qualities or high moral principles and ideals".

​Earlier on Sunday, Trump tweeted that the "Noble Committee" should revoke the prizes it gave to the "lamestream media" and give those chimerical prizes to journalists who "got it right". He apparently misspelled the word 'Noble', while confusing the award with the Pulitzer Prize.

"Does sarcasm ever work?", the president tweeted. Judging from the reaction of netizens, in Trump's case it did not.

Does anybody get the meaning of what a so-called Noble (not Nobel) Prize is, especially as it pertains to Reporters and Journalists? Noble is defined as, “having or showing fine personal qualities or high moral principles and ideals.” Does sarcasm ever work?

​Twitter users wondered why he was deleting his tweets if they were intended to be sarcastic.

And yet you deleted your hilarious three-tweet “Noble Prize” rant.

Why’d you delete your tweets if they were sarcasm? You gonna use this excuse for all the times you say something incredibly stupid, now?

​Users slammed Trump for another "careless mistake", reminding him of all the previous times his irony fell flat.

Pretending that it was sarcasm when it was a careless mistake turns an innocent oversight into a really bad show of moral character. The American people don’t want a lying President, especially one who tells everyone to inject disinfectants and then says it was sarcasm. Stop it.

If nothing else, we’ve learned that Donald Trump is having some serious trouble grasping the concept of sarcasm.

HOW DO YOU DO SARCASM?! pic.twitter.com/0i0ymp1IKQ

Some users adviced Trump to discuss the sarcasm failures with the "Noble" committee.

Call the Noble Committee and ask them. https://t.co/f4Q0BSKVZF

This is not the first time Trump tried to redefine a fiasco as sarcastic. Earlier in the week he suggested injecting disinfectants into the human body and using sunlight to treat COVID-19 during a White House press conference.