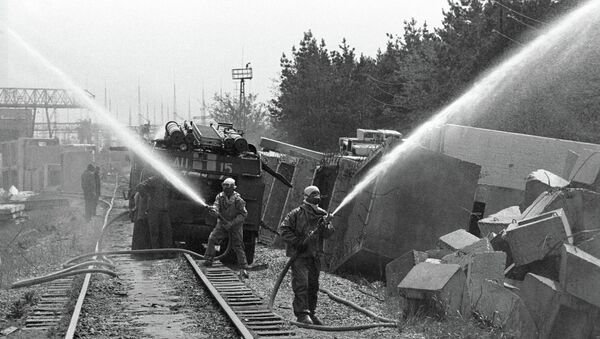 © Sputnik / Vitaliy Ankov
Subscribe
Ilya Tsukanov
All materialsWrite to the author
Sunday marks the 34th anniversary of the Chernobyl nuclear accident, one of worst manmade disasters in history.

On April 26, 1986, Chernobyl Nuclear Power Plant deputy chief engineer Anatoly Dyatlov began the fateful ‘safety test’ experiment which would result in an uncontrolled nuclear reaction and steam explosion, followed by a graphite fire at the plant’s Reactor Number 4. The accident led to the spewing of radiation across hundreds of kilometers, irradiating hundreds of thousands of people, causing at least 4,000 premature deaths from cancers and other illnesses, and contaminating wide swathes of southern Belarus and northern Ukraine for decades to come.

The disaster cleanup involved hundreds of thousands of people from all walks of life, from firefighters and military personnel to scientists, doctors and the engineers planning and building the massive sarcophagus which would be erected around the reactor by December 1986.

But the effort also included the lesser known or talked about efforts by the Soviet Union’s fearsome intelligence agency, the KGB, whose agents played a crucial role in helping to contain and then eliminate the consequences of the disaster.

Efforts in the Disaster Zone

Long before Chernobyl, the KGB was tasked with ensuring the safe operation of nuclear power plants, with scientifically-trained officers given the mission of monitoring nuclear power plants and identifying potential weaknesses, reporting any problems to the sixth (economic) directorate of the KGB in Moscow.

In 2018, declassified archival documents from the Ukrainian republican-level KGB archives revealed that the intelligence service had expressed concerns about the plant going back as far as 1978, reporting numerous safety violations and injuries sustained by workers during the plant’s construction to the ministry of energy. Furthermore, according to some sources, in early 1986, just weeks before the disaster, Ukrainian KGB agents reported to Communist Party boss Vladimir Shcherbitsky that they were on the alert for possible subversive actions by enemy intelligence on the territory of Soviet Ukraine. 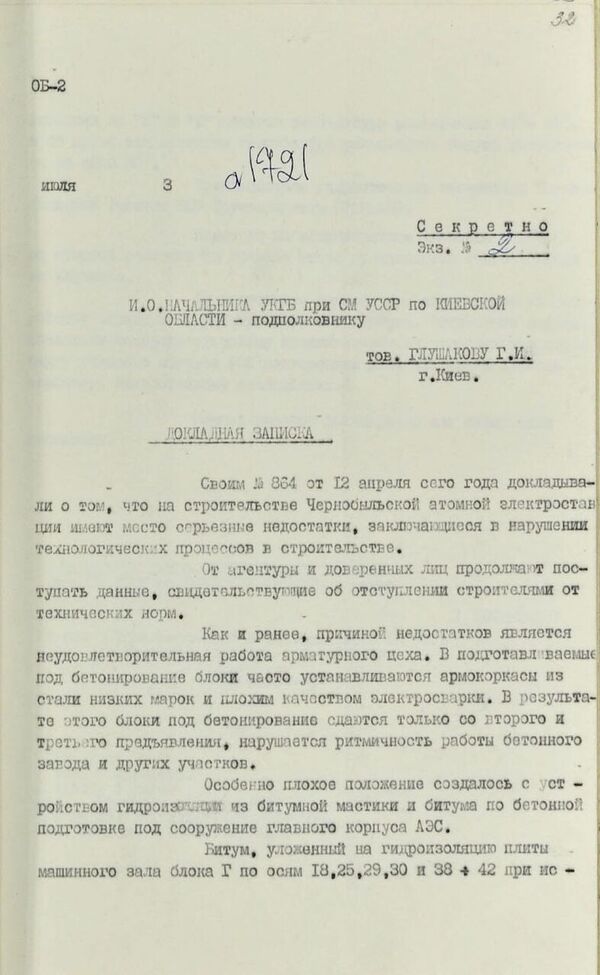 Excerpt from classified KGB report on violations of technical norms during construction of the Chernobyl Nuclear Power Plant.

What the security services proved unable to account for or predict were the actions of senior personnel responsible for Reactor Number 4, and their irresponsible behaviour on the fateful night of April 26, 1986, including deputy director Dyatlov’s forced shutdown of multiple computerized and manual safety systems, and overruling of colleagues’ concerns before proceeding with an experiment to simulate power generation during a power outage. Combined with flaws with some elements of the plant’s design, Dyatlov’s actions proved to be most directly responsible for the disaster.

Within minutes of the explosion, KGB agents in Pripyat, the model city housing the power plant’s workers, traveled to the epicenter of the disaster to try to determine what had happened. Afterwards, as the disaster cleanup began, agents joined nuclear specialists, military personnel and miners in organizing the cleanup of the reactor and participating in the operation to prevent widespread contamination, including the crucial task of erecting a shield underneath Reactor Number 4 to prevent radiation from leaking into local groundwater.

Among the KGB’s jobs on the ground was the provision of personal protective equipment to liquidators, and responsibility for hygiene in canteens during the hot summer of 1986 to prevent food poisoning and infections among cleanup workers. The officers’ commitment to frontline duties was demonstrated by their regular rotation, with agents forced to leave the cleanup area after medical analyses showing that they had received heavy doses of radiation. 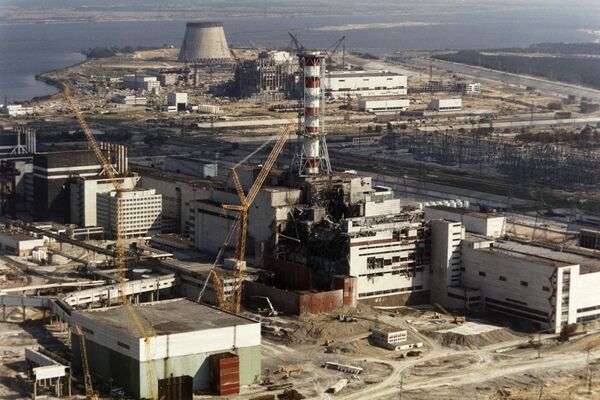 The KGB’s foreign intelligence directorates played their own crucial role in the months following the accident, with details about their efforts only recently revealed in the six volume work ‘Essays on The History of Russian Foreign Intelligence’. Information regarding the Chernobyl disaster can be found in volume six, in an essay entitled ‘Lessons of the Accident at the Chernobyl Nuclear Power Plant’, written by former Russian prime minister, foreign minister, and foreign intelligence service chief Evgeny Primakov.

In the essay, Primakov details how, in the immediate aftermath of the accident, KGB chairman Viktor Chebrikov ordered that the resources of the KGB’s scientific and technical intelligence division be used to collect any and all information that might somehow help speed the containment and cleanup effort. The division sent a representative directly to the disaster area in early May to join the state commission. His mission was, first and foremost, to provide the commission with any information obtained from foreign residencies on how to deal with the disaster.

The division’s agents abroad, scientifically trained, knew where to look for information and who to contact to obtain it. Their work proved crucial because, despite the fact that the Chernobyl disaster threatened the safety and wellbeing of people and nations the world over, Western leaders were not in a hurry to share their experience on eliminating the consequences of a nuclear disaster with their Cold War adversary. Western governments and scientists had obtained valuable experience in nuclear disaster cleanup in the aftermath of the October 1957 accident at the UK’s Windscale nuclear power reactor, the Three Mile Island incident in the United States in 1979, and the accident at the Saint-Laurent Nuclear Power Plant in France in 1980. Still, despite official resistance, many foreign scientists and officials proved willing to share crucial information with their Soviet counterparts. 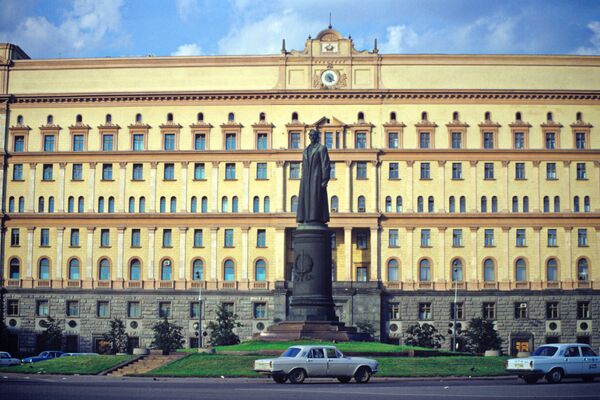 Any data that was received by agents was delivered to Moscow, from where it was taken to Kiev, and then to a commission representative outside Chernobyl. Within two weeks of the explosion, agents obtained a wide range of foreign documentation on the construction, operation and safety of nuclear power plants.

The KGB was also actively involved in the effort to get an accurate reading on the temperature at the mouth of the reactor amid high radiation levels – a technical capability which Soviet industry did not have at the time. The scientific and technical service was therefore tasked with the purchase and delivery of a device which could make such readings. Using it, scientists were able to determine that there was no immediate danger of nuclear fuel melting through to the groundwater.

Amid concerns from the state commission that flood waters could drain nuclear-contaminated fallout into the Pripyat River, the KGB was also asked to collect data on other countries’ experience in the construction of specialized dams to protect rivers from polluted water. Here too their efforts proved successful.

Other invaluable intelligence included foreign scientific studies about the radioactive contamination of soil, and strategies to prevent radionuclides from being spread by wind. Using the information obtained, Soviet scientists were able to create a special polymer fluid which covered the contaminated soil around the disaster area, solidifying it into a film which trapped radioactive substances. 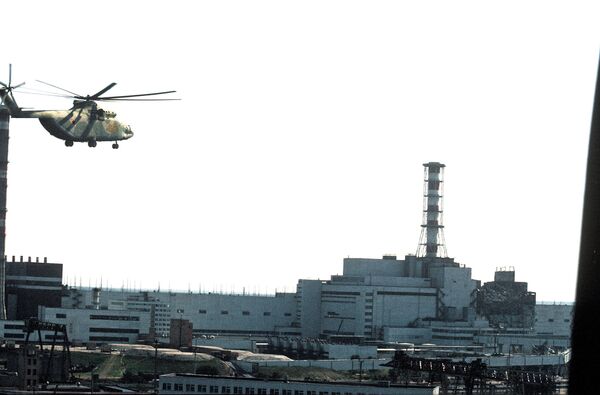 Furthermore, agents obtained valuable data on how to treat patients who had received large doses of radiation, and how to assess future expected spikes in illnesses following a nuclear accident. This included the collection of data on international standards regarding permissible doses of radiation for both people and animals, as well as food production and environmental pollution. The KGB compiled a document on this subject within two weeks of the disaster. In addition to the state commission, the KGB sent relevant information to national and republican leaders, ministries and departments.

Summing up the work of Soviet intelligence in dealing with the aftermath of the Chernobyl nuclear disaster, Primakov stressed that agents’ work became “an important contribution…in ensuring the security of a vital sector of our society, and helped to draw lessons for the future.”