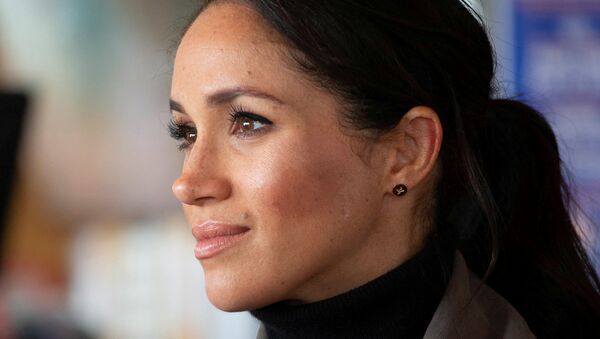 © REUTERS / POOL New
Subscribe
On Friday, the United Kingdom’s High Court held a primary hearing in Meghan Markle’s defamation case against the UK media outlet. The former royal and her husband, Prince Harry, are expected to virtually join the court in an online hearing from their residence in Los Angeles, California, United States.

The Duchess of Sussex, Meghan Markle, will testify in her lawsuit against British newspaper the Mail on Sunday and its parent company, DMG Media, formerly Associated Newspapers, for breach of privacy after the newspaper published excerpts from “confidential” correspondence between her and her father, Thomas Markle, in February 2019, the Daily Mail reported.

Markle’s lawyer, David Sherborne, told the court during the Friday hearing, held via online video due to the ongoing coronavirus outbreak, that the Duchess is willing to give testimony in the case, as she is suing the newspaper, according to the Daily Mail.

“The defendant [Associated Newspapers] wants to cross-examine her [Meghan] as to whether that belief is reasonable or not - and they can do that,” Sherborne reportedly said.

Markle is accusing the publisher of copyright infringement, misuse of private information and violating the UK data protection law.

Sherborne argued that newspaper edited the letter in a “misleading way”, omitting words and even “whole sentences”, in the version they circulated, which he said were signs of “bad faith”.

The correspondence in question is a handwritten letter Meghan Markle wrote to her father in August 2018. The letter was handed to the Mail by the royal’s father after her friends told People magazine that the Duchess had written the letter in a bid to mend the rift in their relationship, which had worsened following Markle senior's absence at her wedding with Prince Harry.

DMG Media is denying the royal’s allegations, especially the claim of misusing the letter by presenting it out of context.

000000
Popular comments
Well, I guess they have got to claw an income from somewhere.