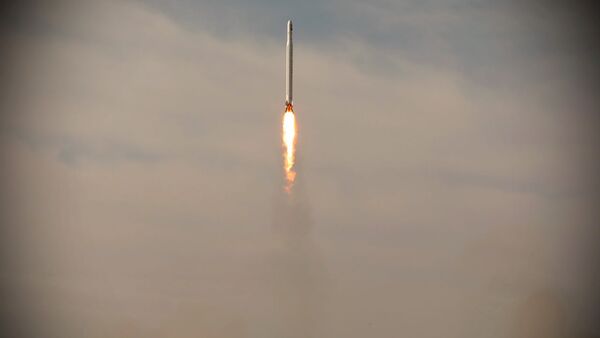 The launch of the Noor-1 (‘Light-1’ in Farsi) satellite is not only a breakthrough for Iran’s space programme, but another step in altering the regional balance of power, Iranian media have suggested, citing the satellite’s successful Wednesday launch and the international reaction to it.

Key facts about the satellite:

This video is overloaded with information, including visuals of separation of the stages 1/2, ignition of 2nd stage and more. A treat pic.twitter.com/F2CVbjz6OR

From New Intelligence Capabilities to Shifting the Geopolitical Landscape

The Iranian government, the IRGC and the media have provided very little information about the Noor-1’s capabilities, except to describe it as a “multi-purpose satellite with special uses in the defence sector.” Indeed, the IRGC launched the satellite without providing any advanced notice.

According to an analysis by Press TV, the satellite’s launch seems to indicate “that the IRGC has reached such technological maturity that it can now confidently plan and carry out intelligence warfare and military reconnaissance missions from space while gathering data that helps keep the Iranian skies safe.”

For its part, Mehr News similarly argues that the new satellite will enable the IRGC to monitor Earth from space. Geopolitical analyst Anthony Cartalucci told the news agency that for Iran, the Noor-1’s launch “is a major milestone and reflects a degree of technical competence that will serve as a warning to those who have for decades attempted to undermine Iranian sovereignty.” Specifically, he noted, “access to space enhances a nation’s economic and military capabilities, expanding methods for communication, surveillance, and signal intelligence.” Ultimately, Cartalucci said that Iran’s achievement “helps add a greater degree of balance to what many are calling the emerging multipolar world.”

Jonathan McDowell, an astrophysicist and amateur satellite tracker, told SpacePolicyOnline.com that the thing that surprised him most about the Noor-1’s launch was that it confirmed the existence of a separate, and apparently successful Iranian military space programme. Furthermore, he said, the Qased’s “solid upper stages are new, so it’s a bit surprising they worked the first time.”

President Donald Trump appeared to dismiss the significance of the launch, boasting at a press conference Wednesday that US intelligence knows “more about Iran than they do,” and stressing that the US “knew it was going up” and “followed it very closely.” According to Trump, Tehran carried out the launch for publicity.

Secretary of State Mike Pompeo, expressed a more worrisome sentiment, accusing the IRGC of being “terrorists” and suggesting that Iran should “be held accountable for what it has done,” claiming that the launch was a violation of UN Security Council Resolution 2231, which endorsed the Iran nuclear deal.

It’s worth pointing out that the text of the resolution clearly stresses that Iran is to avoid “any activity related to ballistic missiles designed to be capable of delivering nuclear weapons,” a capability Iranian officials have repeatedly denied pursuing.

US has been bullying all against UNSC Resolution 2231 since 2017.

Neither can lecture Iran based on flimsy misreadings of UNSCR 2231.

Iran neither has nukes nor missiles “DESIGNED to be capable of carrying” such horrific arms.

On Thursday, Russian Foreign Ministry spokeswoman Maria Zakharova said that it was ironic that the US, “a nation that has flagrantly breached the norms of international law and violated UNSC Resolution 2231, is trying to deflect international condemnation by baselessly accusing Iran of noncompliance with the requirements of the Security Council”.

Iran’s foreign ministry has similarly stressed the defensive objectives of its space programme, and its ongoing commitment not to pursue the creation of nuclear weapons, while blasting the US over Washington’s own violations of Resolution 2231, including Washington’s withdrawal from the nuclear deal and sanctions against Iran.

On Thursday, an IRGC spokesperson announced that Iran now plans to launch a Noor-2 satellite, and may use solid fuel for the first stage.