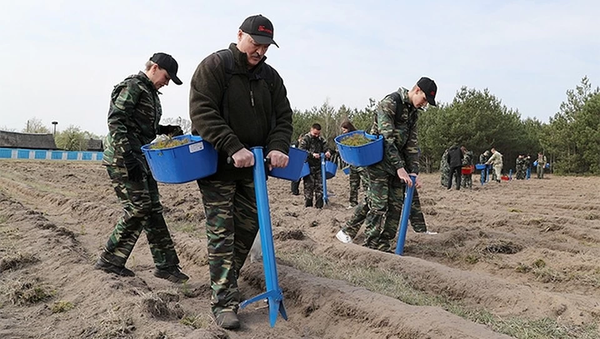 © Photo : president.gov.by
Subscribe
Ilya Tsukanov
All materialsWrite to the author
Reporting nearly 9,600 COVID-19 cases and 67 virus-related fatalities, Belarus has remained one of the few countries in the industrialized world to resist widespread lockdown and self-quarantine measures, preferring a ‘pinpoint’ strategy to tackling the virus instead.

Belarusian President Alexander Lukashenko, who has gotten a name for himself for his outspoken statements about the coronavirus, traveled to the Pripyatsky National Park, about 250 km from the epicenter of the Chernobyl exclusion zone in neighbouring Ukraine on Saturday to plant trees as part of the country’s annual ‘community labour’ day events.

In a video of the event put out by the president’s press service, Lukashnko, an active outdoorsman, can be seen walking through a field, holding a tree-planting bar, with two blue buckets attached to his waist – one containing pine saplings, and the other a small dog. A female assistant in military fatigues is seen helping him in the planting process.

The president took part in the event as part of Belarus’s republic-wide ‘subbotnik’, a once-a-year day of volunteer community labour in which as many as 2.5 million Belarusians are said to have taken part.

Similar scenes could be seen across the country, as residents engaged in community cleanup efforts, planted trees, and engaged in other forms of labour to tidy up their neighbourhoods and parks.

Formed in 1996, the Pripyatsky National Park is a nature preserve in Gomel region, southern Belarus. The park is situated within the estimated 20 percent of Belarusian land area which was contaminated in the aftermath of the Chernobyl nuclear disaster of April 1986.

President Lukashenko has made a name for himself amid the global coronavirus pandemic over his refusal to institute strict quarantine measures in his country, with Western media repeatedly poking fun at him over his off-the-cuff remarks last month about drinking vodka, driving tractors and taking dry saunas to avoid infection. The Belarusian president has taken offense over such media coverage, however, emphasizing that while the country would not disregard World Health Organization advice, it would act in accordance with local conditions and based on the need to ensure the functioning of the economy and social sector.

Not dismissing the threat posed by the coronavirus out of hand, Lukashenko has criticized global statesmen and media for what he described as coronavirus’s “politicization” and alleged efforts by some countries to use the virus to their own economic or geopolitical advantage.

Belarus is one of just a handful of European states, the others being Sweden and Iceland, which have refused to take widespread restrictive quarantine measures amid the global COVID-19 pandemic.

000000
Popular comments
President Alexander Lukashenko is certainly an interesting individual. Appears to be an old-school patriot, something many western nations could only dream of.