'Come Dance With Me': Bella Thorne Teases Fans With Hot Bikini Dance in Her Backyard 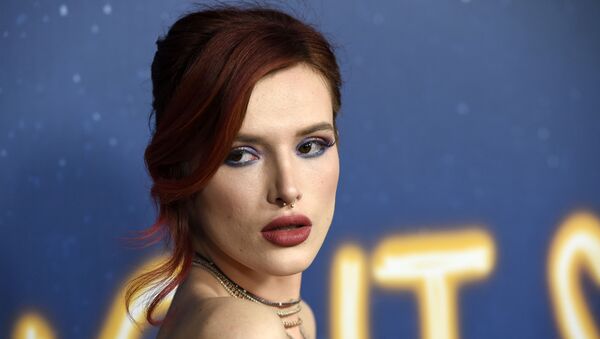 © AP Photo / Chris Pizzello
Subscribe
Disney child star and singer Bella Thorne is spending her quarantine at her California mansion, far from her Italian pop star beau. According to frequent updates in her Instagram feed, she is already visibly bored from the lockdown, despite often calling upon her followers to maintain social distancing.

Bella Thorne has put her Instagram on fire with some dancing moves, by posing in nothing but a greenish bikini suit, while quarantining at the backyard of her mansion in California.

The Disney star called upon her audience to “come dance” with her, while whirling to the “We had a deal” track by Father on the clip, and immediately received thousands of likes and reactions, including one from her Italian boyfriend Benjamin Mascolo, who has been staying far from his beloved during lockdown.

“I can teach you some moves”, wrote Mascolo, who has recently celebrated one year with Thorne.

The singer earlier published a sweet Instagram post devoted to the couple’s anniversary, where he thanked the actress for teaching him “the meaning of love and life” and said that meeting Thorne was “the best thing” that ever happened in his life.

The couple have been communicating extensively on social media, despite being stuck on different continents, with Thorne occasionally publishing some screenshots of their virtual communication. She also called upon her followers to maintain “safe physical distancing”, while signing a “Stay Home, Don’t Date” petition and taking part in the “I’m Live With Friends” challenge.