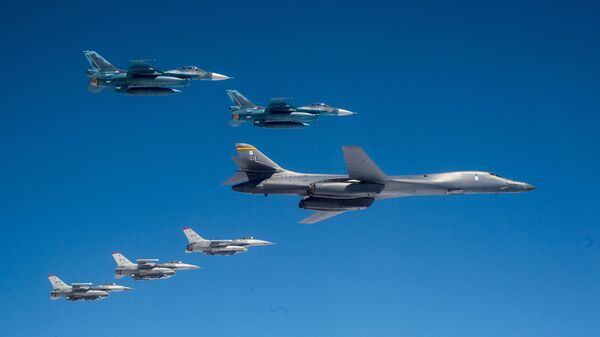 The US Air Force (USAF) sent a supersonic B-1B Lancer bomber on a 30-hour trip from South Dakota to Japan earlier this week to drill just off the coast of the city where it’s believed North Korean leader Kim Jong Un is recovering from surgery.

The US Air Force announced its 37th Bomb Squadron sent one of its B-1B Lancer supersonic bombers on a 30-hour trip across the Pacific Ocean to Japan, where the bomber met up with a slew of Japanese fighters to run combat drills.

According to the release, the Lancer met up with six USAF F-16 Fighting Falcons as well as seven F-2s and eight F-15s from the Japan Air Self Defense Force (JASDF) before returning to Ellsworth Air Force Base in South Dakota.

“This was a higher headquarters directed operational mission to assure our allies, and deter adversaries while demonstrating the dynamic force employment model,” Lt. Col. Lincoln Coleman, 37th Bomb Squadron commander, said in the release. “This was a total team effort involving every group on base that provided us with the opportunity to integrate with multiple Air Operations Centers in different areas of responsibility.” 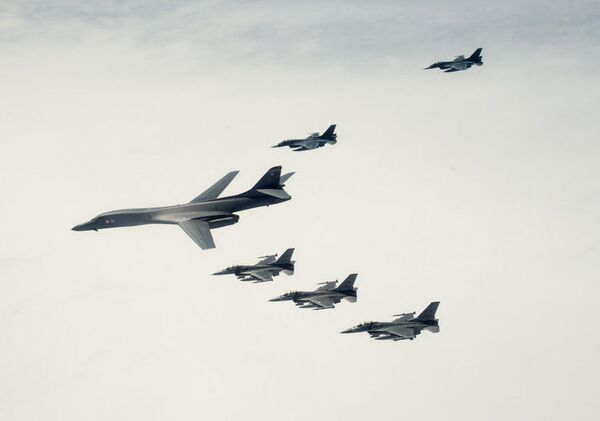 The news release mentions practice runs at Draughon Range, which is at Misawa Air Base in northern Japan, but what the Air Force neglected to mention was that more exercises occurred just off the coast of a North Korean city where it’s believed that Kim is recuperating after surgery.

Sending a Message to North Korea?

The South Korean daily Dong-a Ilbo reported on Friday that the aircraft had drilled just 500 miles away from Wonsan, an eastern city in the Democratic People’s Republic of Korea (DPRK), noting that is where it is rumored Kim is convalescing.

A source in the South Korean military, which did not participate in the drill, told Dong-a Ilbo, “Some of the intention behind the drill appears to preempt North Korea’s imminent military muscle-flexing that is designed to dispel the rumor surrounding the ill health of its young leader.”

The claim is seemingly confirmed by aircraft tracking page Aircraft Spots, which noted the Lancer continued from Misawa to Okinawa before returning home via the North Pole.

USAF B-1B HYPER21 executed a flight from Ellsworth AFB to Japan via the Bering Sea & North Pacific. The bomber worked with JASDF fighters near Misawa AB, then flew to a point near Okinawa before the return trip to Ellsworth AFB. pic.twitter.com/YhlcDaFAbM

​According to the Air Force, this drill was part of the “dynamic force employment model” adopted by the Pentagon in recent years as a way of keeping adversaries on their toes by breaking up the monotony and predictability of regularly scheduled deployments and rotations.

“The rapid employment of airpower directly supports the National Defense Strategy and assures we can provide overwhelming force anywhere, anytime in support of American interests or our Allies and partners,” Gen. Tim Ray, commander of Air Force Global Strike Command and Air Forces-Strategic, said in the release.

“This mission is a demonstration to our friends throughout the region: we will continue to remain fully predictable in our commitment to ensuring peace, while also demonstrating that we have the ability to operate from numerous locations across the globe, even during the global pandemic.” 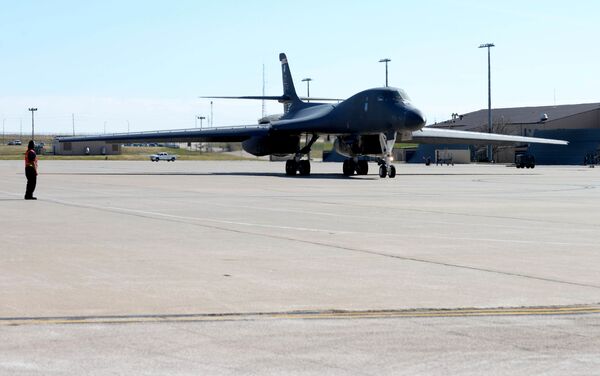 A B-1B Lancer is marshaled to the taxiway at Ellsworth Air Force Base, S.D., April 21, 2020. The B-1B’s speed and superior handling characteristics allow it to seamlessly integrate in mixed force packages.
© 28th Bomb Wing Public Affairs

The choice of a B-1B Lancer is symbolic as well: the swing-wing supersonic bomber, designed by Rockwell for fast, low-altitude nuclear strikes, hasn’t been to the Indo-Pacific region since January 2018, when a squadron based on the US territory of Guam rotated back to the United States. While on deployment, however, the Lancers had participated in mock attack runs on the DPRK, approaching in attack formation only to veer away just as they approached the border.

Following an unverified report earlier this week that Kim was in “grave danger” following surgery, rumors swirled in the media and governments alike about Kim’s fate and what might happen in the socialist country of 25 million. While the media has generally been more extreme in its floating of potential scenarios, governments from Seoul to Washington have been more measured in their responses.

US Vice Chairman of the Joint Chiefs of Staff Gen. John Hyten told reporters during a briefing at the Pentagon on Wednesday he was confident Kim remained in control of North Korea’s military, including its nuclear weapons, but noted he had no firm evidence about Kim’s status. US President Donald Trump said likewise, but wished the statesman well; talks between Trump and Kim opened the door to unprecedented rapprochement with the DPRK, especially by South Korea.

For its part, Pyongyang has totally ignored the rumors, and while press photographs have been absent, regular reports continue to roll out covering statements and actions by the 36-year-old leader, Sputnik has reported. The South Korean government, likewise, has shown little regard for rumors, with representatives telling the media they are unconcerned about Kim’s health.