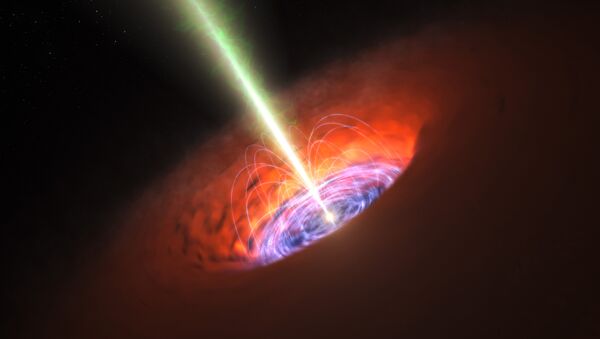 © ESO/L. Calçada
Subscribe
A red giant star located some 250 million light-years from Earth was recently found to have played quite the dangerous game of chicken with a very hungry supermassive black hole in the galaxy GSN 069, astronomers revealed this week.

Astronomers came across the shocking find after reviewing data collected by NASA’s Chandra X-ray Observatory and the European Space Agency’s XMM-Newton telescope. The analysis of the case ultimately showed that while the star managed to escape the grips of a black hole after having been pulled in by its gravitational force, it didn’t exactly make a clean getaway.

A star earns the “red giant” scientific label once it reaches the stage in its stellar evolution at which point it has used up all of the hydrogen at its core and begins to collapse under its own gravity, before eventually undergoing a process where it begins to fuse helium into carbon. The process takes billions of years and sees the star expand to a much larger size.

However, unfortunately for the red giant captured by the black hole, it paid a terrible price for its grand escape - it lost its outermost layers, leaving only its core behind. Researchers noted in a Thursday release that the layers were “stripped off and careened toward the black hole.” 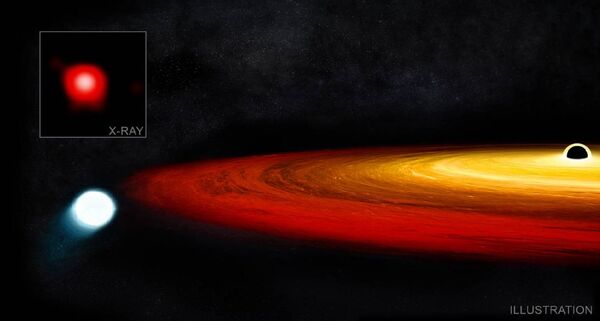 Data from NASA’s Chandra X-ray Observatory and ESA’s XMM-Newton uncovered the account that began with a red giant star wandering too close to a supermassive black hole in a galaxy about 250 million light years from Earth. The black hole, located in a galaxy called GSN 069, has a mass about 400,000 times that of the Sun, putting it on the small end of the scale for supermassive black holes.
© X-ray: NASA/CXO/CSIC-INTA/G.Miniutti et al.; Illustration: NASA/CXC/M. Weiss

Having undergone the dramatic event, what was once a red giant is now considered a white dwarf, a dense star that would typically form after a star had exhausted its central nuclear fuel and expelled its outer material, which would create a planetary nebula.

But don’t put that tissue box away just yet, folks: that’s not the end of the story of this half-eaten star.

According to Andrew King, the lead researcher of the study, the black hole isn’t exactly done snacking on the former red giant. “[The white dwarf] will try hard to get away, but there is no escape,” he said.

“The black hole will eat it more and more slowly, but never stop,” he emphasized.

King further explained that at present, the white dwarf is stuck in an elliptical orbit around the black hole, completing one revolution roughly every nine hours. During each revolution, a little more of the star’s material is pulled off when it makes its closest approach to the black hole.

“In principle, this loss of mass would continue until and even after the white dwarf became a planet, with a mass similar to Jupiter, in about a trillion years,” King said, adding that “this would be a remarkably slow and convoluted way for the universe to make a planet!”

The existence of the supermassive black hole at the center of this find by astronomers was first announced by researchers in 2019 during an earlier review of data collected from the Chandra X-ray Observatory and the XMM-Newton telescope.

The two observatories first detected two X-ray outbursts from the black hole on December 24, 2018. An additional five bursts were recorded in late January 2019, with three more in mid-February 2019.

Researcher Giovanni Miniutti noted in a release issued at the time that the black hole’s consumption of material around it was so “unprecedented” that officials “had to coin a new expression to describe it: ‘X-ray quasi-periodic eruptions.’”