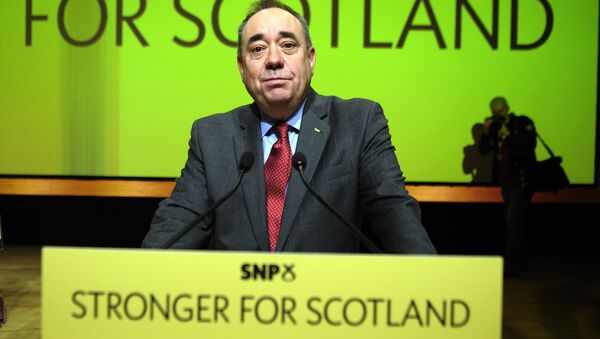 Former Scottish First Minister Alex Salmond was cleared of all 13 sexual assault charges after a two-week trial in March. Those who’d levelled allegations against Salmond included an SNP politician, party worker and current and former Scottish government civil servants and officials. His allies suggested he'd been the victim of a witch-hunt.

Contempt of court proceedings have been launched against former British diplomat and popular alternative blogger Craig Murray for his reporting on Alex Salmond’s sexual assault trial.

Salmond was acquitted of all charges of sexual assault by a jury of eight women and five men after about six hours of deliberations. The outcome was greeted by Salmond, who praised for the judicial system - it also prompted demands from his supporters that certain figures within the SNP resign for failing to stand by him, or indeed endorsing his accusers.

Joanna Cherry QC, an SNP MP, called for Salmond to be allowed to rejoin the party immediately, and for an independent inquiry into the way the party dealt with the allegations to be launched.

“Some of the evidence that has come to light both in the judicial review and at this trial raise very serious questions over the process that was employed within the Scottish government to investigate the alleged complaints against Mr Salmond, and I am sorry to say some of the evidence also raises serious question marks over how these complaints were handled by the SNP,” she said.

Murray, UK ambassador to Uzbekistan 2002 - 2004, attended two days of the trial at the High Court in Edinburgh, and published articles about proceedings daily.

​Writing on his blog 14th April, before the charges were laid, Murray said he was “very careful throughout [the trial] to stay clear of contempt, more so than the mainstream media”.

“Contempt of Court carries up to two years in prison and is decided by the judge without a jury, on a summary hearing…Unlike the Guardian and the Times, for example, I omitted in my reporting the fact one of the accusers had been present at a meeting with Nicola Sturgeon and Geoff Aberdein on 29 March 2018, precisely because to include it could’ve lead to her easy identification. I was much more careful than the mainstream media – but they were not threatened with contempt of court or banned from covering the trial,” he noted.

Rather than his reporting amounting to contempt of court, Murray said “the truth” was he was removed from the court after two days because “nobody else” but he “produced the in-depth detail of the defence case that refuted the prosecution allegations, using eye witness testimony that in many cases proved the accusers were actively lying”.

"The mainstream media gave detail of prosecution evidence and copied out the most sensational phrases of allegation to make lurid headlines; they gave virtually no detail of the defence witnesses or what they said on oath...Were it not for my reporting, the verdict would have seemed utterly perverse to the people of Scotland. Fortunately this blog has a large enough reach, sufficiently amplified by many thousands of other social media users, that I was able to get the truth out far enough to people, particularly within the Independence movement, to make a very real difference. Despite the concerted attempts of the Crown to prevent me," Murray continued.