Nobody Will Survive if Pandemic Spreads in Iraq's IDP Camps - Official 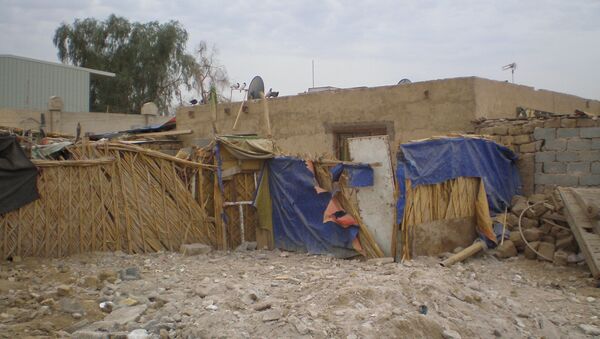 CC BY 2.0 / Department of Foreign Affa / Chikook IDP camp, Baghdad, Iraq
Subscribe
Iraq's internally displaced persons might have survived Daesh*, but they have zero chances of completely fighting off the COVID-19 pandemic that continues to spread throughout the war-torn country, warns an official who has been working with IDPs since 2016. Certain obstacles make matters worse, but IDPs are determined to keep the virus at bay.

The coronavirus continues to spread across Iraq, with the country's Health Ministry registering 28 news cases as of Wednesday.

So far, more than 80 people have died from the virus and more than 1,600 are still being treated in hospitals across the country.

In an attempt to contain the spread of the pandemic, authorities have imposed a number of strict measures, some of which were implemented at the beginning of March, when the first bits of news about the virus started coming in.

These included the halting of all flights to and from Italy and neighbouring Iran, the shutting down of public places including stores, restaurants, swimming pools, and parks as well as the closure of educational institutions.

Authorities have also imposed full lockdowns on towns and cities although the curfew has been eased of late in the capital Baghdad to let locals prepare for Ramadan, the holiest month in the Islamic calendar.

But while officials have been easing their grip in some parts of the country, in 95 crowded camps scattered across Iraq the situation remains the same.

Since February, the internally displaced persons (IDPs) residing in those camps have not been allowed to leave unless for "an urgent" reason (such as medical treatment, reunification with a family member, or meeting the authorities). They are also banned from receiving any visitors except for aid workers.

IDPs have also been instructed to avoid gathering in large groups, "even during the distribution of food, for IDPs own protection", said an official document released by the United Nations Office for the Coordination of Humanitarian Affairs, a directive that some say will be next to impossible to follow.

An official working in IDP camps located half an hour from Mosul in northern Iraq, who agreed to talk on condition of anonymity, said the conditions are so difficult that had COVID-19 reached one of the camps, "nobody would have survived the virus".

An area that encompasses three camps and houses more than 10,000 people was established amid ongoing battles between Iraqi forces and Daesh that drove thousands from their homes.

Those who survived the terrorist group but couldn't afford to go back home were forced to move into the IDP camps where space is a rare commodity.

"The World Health Organisation is saying people should keep a two-metre distance away from each other. This is the distance between the tents in these camps. Very often you have families where a man has two wives and several kids, rounded up in a 20-metre tent, so self-isolation and privacy are definitely not an option here", said the official.

Medical treatment is not an option either. Even before the outbreak of the pandemic, the medical system in Iraqi Kurdistan was regarded as weak, a study among medical professionals found. In 2010, 68 percent of the 250 professionals in the Erbil area responded that the quality of medicine was poor and so was the availability of sufficient medical equipment. Around 72 percent had a rather negative view of the overall health system.

And the official says that the situation in the camps is much worse. "In Kurdistan we don't have the ability to treat people in cities, let alone camps. If COVID-19 reaches these camps, our medical staff will not be able to handle the challenge".

Since the authorities' decision to impose lockdowns on camps, neighbourhoods, and towns the staff of Khazir and Hassan Sham have been checking up on displaced people via phone, while medical personnel visit the area three times a week to attend to those who need help.

"Luckily for us, not a single case of COVID-19 has been registered so far. But the reason for this is not only the strict measures introduced by the government. It is also the personal responsibility of the IDPs", said the official.

"People here are aware of the pandemic and they know what it means if the virus penetrates the camps. That's why you will not see any gatherings here, no family visits or even kissing, our typical way of greeting each other. IDPs have suffered a lot and they don't want another problem to worry about".