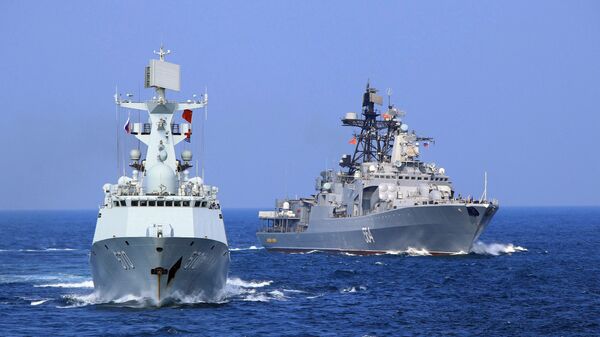 New Delhi (Sputnik): The South China Sea is a disputed region where overlapping claims are made by China, Vietnam, Brunei, the Philippines, Taiwan, and Malaysia. Earlier this week, Beijing issued a proclamation of sovereignty over dozens of geographical features in the South China Sea, weeks after Vietnam protested China’s right to do so.

Stating that its position on the South China Sea is consistent and clear, the Foreign Ministry of Malaysia on Thursday said that the presence of warships and vessels in the region has the potential to increase tensions that in turn may result in a miscalculation. The statement comes after the US and Australia joined a survey ship deployed by Malaysia amid the assertive approach of China in the region.

Malaysia’s Minister of Foreign Affairs Y.B. Dato' Seri Hishammuddin Tun Hussein said in a press statement: “I am deeply aware and conscious of the situation. We must avoid unintended, accidental incidents in these waters. While international laws guarantee the freedom of navigation, the presence of warships and vessels in the South China Sea has the potential to increase tension that in turn may result in miscalculation which may affect peace, security and stability in the region”.

Earlier this week, Australian frigate the HMAS Parramatta joined three US warships already carrying out a drill near a Chinese survey ship that is reportedly exploring oil in the region.

Asking all parties to work together in order to enhance mutual trust and confidence to maintain peace and stability in the region, the nation emphasised that it remains firm in its commitment to safeguard its interests in the region.

“Malaysia hold the view that South China Sea should remain a sea of peace and trade. Thus, matters relating to the South China Sea must be resolved peacefully based on the principles of international law, including the United Nation Convention on the Law of the Sea (UNCLOS) 1982”, the ministry stated. The Southeast Asian country made it clear that it has been in open and continuous communication with all the relevant parties, including the People’s Republic of China and the United States of America.

Earlier, on Sunday, China’s Natural Resources Ministry and Civil Affairs Ministry published a joint release claiming sovereignty over 25 islands, shoals, and reefs, as well as 55 submerged oceanic mountains and ridges, all in the contested waterway south of the mainland.

The South China Sea is a resource-rich marine region that has an abundance of gas and oil. The Spratly Islands and Paracel Islands are among the more frequently disputed territories in the area and are contested by Beijing, the Philippines, Brunei, Malaysia, and Taiwan.

India's External Affairs Ministry has also maintained that India stands for a peaceful resolution of the disputes in the region with respect for legal and diplomatic processes.