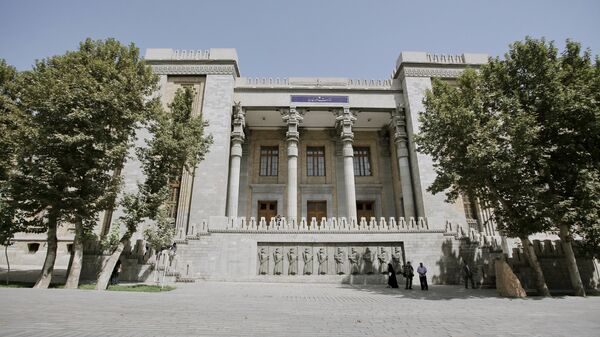 Tim Korso
All materials
The US president said he had "instructed" the country's Navy to shoot and sink Iranian gunboats if they start harassing American war vessels in the Persian Gulf. Head of the Iranian Revolutionary Guard Corps Hossein Salami later cautioned Washington against such step warning that Tehran will shoot back.

Iran's Foreign Ministry has summoned the Swiss ambassador, who represents the US interests in the country in the absence of an American diplomatic mission, to lodge a protest against the most recent US threats against the Islamic Republic.

"He [the diplomat] was given a note for the US authorities with Iran's decisive protest against the threats of the US forces, including their illegal presence and actions, destabilisation of the naval navigation in the north of the Persian Gulf and next to Iran's coast", Foreign Ministry spokesman Abbas Mousavi said.

The ministry said that Iran strongly opposes all threats made by US President Donald Trump in his tweet on 22 April and will respond to any threats to the country.

Iran, in its message conveyed via the Swiss ambassador, also advised Trump to focus on fighting the coronavirus pandemic right now because the US remains the leader in terms of the number of cases worldwide. Tehran additionally suggested that the American military would be of more use in helping Washington deal with the epidemic rather than patrolling the Gulf.

The summoning came in the wake of President Trump announcing that he "instructed" the US Navy to "shoot down and destroy" any Iranian boats that harass American military vessels. The development follows complaints by the Navy that some Iranian gunboats came dangerously close to American warships in the Persian Gulf.

Head of the Iranian Revolutionary Guard Corps (IRGC), Hossein Salami cautioned the US against engaging in hostile actions against Iranian vessels, threatening a "crushing response". He noted that the security of the Persian Gulf is one of Iran's "strategic priorities".