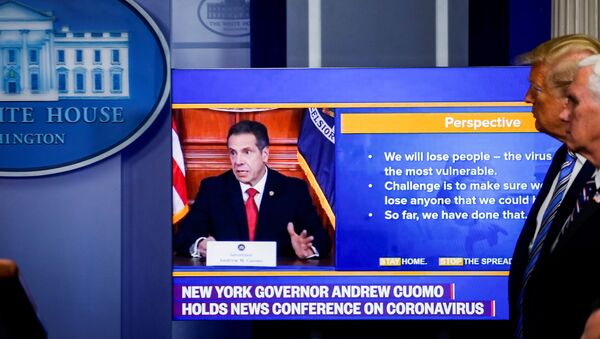 NEW YORK (Sputnik) - New York State does not need anymore the additional hospital capacity provided by the US Navy hospital ship Comfort, deployed to the state on orders of President Donald Trump amid the novel coronavirus (COVID-19) pandemic, and the government may consider redeploying it, Governor Andrew Cuomo said in an interview.

Earlier on Tuesday, Cuomo and Trump held a meeting at the White House. According to Cuomo, the meeting was focused on the issue of acquitting additional COVID-19 testing capacity and went productively.

"The meeting went well and I think it was productive," Cuomo told MSNBC. "The president sent up a Navy ship, the Comfort, a hospital ship, which was very good to have in case we had overflow. But I said, ‘we don't really need the Comfort anymore. It did give us comfort, but we don't need it anymore. So, if they need to deploy it somewhere else, they should take it.’"

The 1,000-bed ship docked in Manhattan on 30 March and was initially planned to be used for tackling non-coronavirus cases and, therefore, free up New York City’s hospital system. Cuomo later asked Trump to use the ship for treatment of COVID-19 patients.

However, the ship did not see many patients and most of its beds were unused given that New York started to beat the COVID-19 pandemic without its hospitals being overwhelmed.

On 6 April, Cuomo announced that a plateau in the COVID-19 epidemic had been hit, after the rate of hospitalizations, intensive care unit admissions and deaths started to gradually decline.

Cuomo said Trump did not say during the meeting what he viewed as an appropriate timeline for New York State to reopen after the state instituted restrictive measures resulting with a shutdown of the economy in March.

The governor said he expected a significant lag in terms of reopening some parts of New York City, such as the Broadway theaters, restaurants and the subway system.

The Department of Health had so far confirmed a total of 251,690 positive test results for the novel coronavirus, as well as 14,828 fatalities.