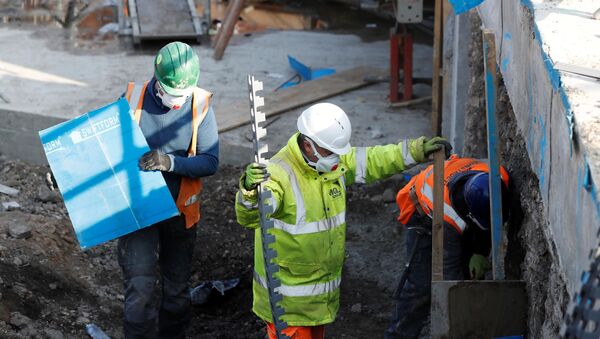 Mohamed Elmaazi
All materialsWrite to the author
Britain's construction industry has been told it can keep operating its sites despite the government demanding that all "non-essential" business close their offices during the COVID-19 lockdown. The sector contributes £117 billion to the UK economy and accounts for a total of 2.4 million jobs, according to the latest data from parliament.

#ShutTheSites has been a growing movement on social media over the past two weeks in the UK, as construction workers have started to publish short videos calling for non-essential work to be suspended and for staff to be financial compensated, amid the coronavirus disease 2019 (COVID-19) pandemic. The British government has allowed property developers in England and Wales to keep their sites open - even permitting social distancing rules to be ignored for up to 15 minutes at a time - despite ordering non-essential business to shut their doors during the COVID-19 lockdown.

Steve Tombs is a Professor of criminology at the Open University who has researched and published extensively on matters of health and safety at work, law and various aspects of corporate crime. He works with the Hazards Movement and the Institute of Employment Rights and is a board and trustee member of the charity INQUEST which specialises in investigating state related deaths.

He told Sputnik that more recently he has been looking at how policies and practices in and out of the work place can end up unnecessarily "cutting short" people's lives.

Sputnik: You recently wrote an article critiquing the UK Government’s decision to permit construction work to go on as normal during the COVID-19 lockdown. What concerns do you have?

My basic concern is this. Whatever we think of the Government’s message - stay at home, protect the NHS, save lives – there does seem to be a logic in social interaction increasing the spread of coronavirus and therefore increasing the numbers of cases, hospitalisations and deaths through our communities. Preventing this was the rationale for ordering all non-essential work to cease on 23rd March. But the construction industry was immediately given the green light to continue its work in England and Wales.

Of course, building workers don’t have the choice of working from home – so their choice, put starkly, was to work or not to eat at the end of the week.

And in this being coerced into going to work, they are using cars, so on the roads, using garages, also buses and the tube, then working in close proximity to each other on site, eating in crowded canteens, and likely in places where a nice hot soapy handwash whilst singing two verses of ‘Happy Birthday’ is not easy.

So they are contributing to the spread of the virus. It’s outrageous really, the situation they are forced into is affecting all of us, and costing lives.

Sputnik:  Why is it in your opinion that the construction industry has been able to remain open during the COVID-19 lockdown whilst so many other industries have been forced to close?

Professor Steve Tombs: Construction has a central part in the UK economy. It is significant in terms of output and total employment. And it has close relationships with central and local government, since the public sector is its biggest employer. It is also the sector that provides the infrastructure that the country needs – houses, hospitals, schools, roads, rail networks.

According to a House of Commons Briefing Paper in December 2019:

So, it has economic muscle and hence, I would argue, tends to be given special licence by government. And none of that is to even get into the close ties between some of the senior figures in the industry and politicians, funding of political parties and so on.

Sputnik: Is there not an argument to be made that if the construction industry is important enough to the British economy that it’s worth the risk to keep construction sites open?

Professor Steve Tombs: Only where these sites are involved in essential work!

The test must be the same for construction as it is with other industries. Essential or non-essential activity? If this involves the Nightingale hospitals, or removing flammable cladding from high-rise tower blocks, then there is an argument to say these are essential and work should proceed if adequate safeguards for workers, and notably access to PPE and good washing, changing and eating facilities, can be given to workers.

But there is no justification for workers travelling to and from sites to work on HS2 or Crossrail, or to build retail parks or luxury apartments. None of these projects are essential in the sense of being urgent. They can all be suspended to ease the spread of the virus, and be picked up again when the public health emergency has eased.

Sputnik: To what extent does the current situation reflect the attitude towards health and safety in the construction industry more generally?

Professor Steve Tombs: The current situation is just an extension of the situation that has existed in the industry for years. Construction is labour intensive. So anything that adds to the cost of employing labour – safer, slower, better protected ways of working – adds costs and eats into profits. It’s as simple as that.

That’s why the industry has always been hostile to trades unions, and indeed has enjoyed covert, long-term and illegal state support in acting on this hostility. So it is no coincidence that it is the industry of ‘the lump’, of the Shrewsbury Pickets, of ‘Blacklisting’. And it’s no coincidence that it is also the most dangerous industry in Britain according to the HSE’s own data.

Sputnik: What do you think needs to change, both now and in the future, in so far as this industry is concerned?

Now, immediately, all non-essential sites need to be closed and workers need to be compensated - paid – as have those in many other industries through what appears on the face of it to be expansive supports schemes rolled out by The Treasury in the past four weeks. This needs to happen yesterday if the spread of the virus is to be minimised.

Where work continues, then proper protection and decent facilities need to be available to workers to protect themselves and others – and the Health and Safety Executive should  do its job and get inspectors onto the remaining ‘essential’ sites to ensure that employers are meeting their basic legal duty: to ensure, so far as is reasonably practicable, the health, safety and welfare of workers and members of the public.

In the medium term, there needs to be reforms of the employment structure within the industry, ending mass, bogus self-employment and reintroducing publicly owned direct labour organisations.

Further, there needs to be transparency and accountability in the complex, opaque sub-contracting and supply chains which the large contractors put in place. And this should be accompanied by new forms of contract compliance, where public authorities as the purchaser of the services of construction firms insist on how they work, embedded into contracts.

But for now – shut the sites and pay the workers.