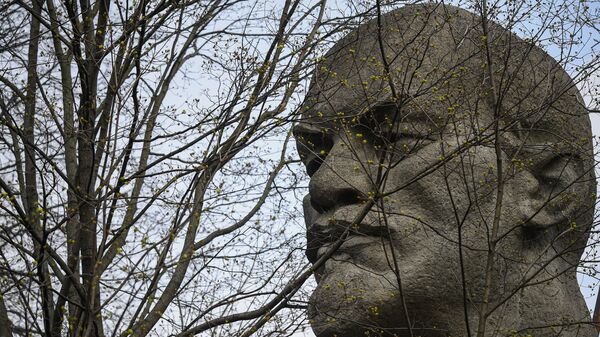 On 8th April 1917, Easter Sunday, a train exited Zurich central station. It was the start of a journey that would profoundly change world history - for on board were Vladimir Ilyich Ulyanov, his wife and 30 of their closest friends.

Two weeks later, on Lenin’s 47th birthday, he was in Petrograd, giving speeches to local Bolsheviks, condemning Russia’s Provisional Government - which had a month prior removed the ruling Tsarist regime - and calling for a pan-European proletarian revolution.

While a continent-wide working class uprising is as of April 2020 yet to materialise, Lenin - and his ideas - would play a pivotal role in the Russian revolution of October that same year, which in turn would inspire insurrectionary upheaval the world over, and shape much of the subsequent 20th century.

“This was the day of the People…We forced our way through the dense mass packed near the Kremlin wall, and stood upon one of the dirt-mountains. Already several men were there, among them Muranov, the soldier, who was elected Commandant of Moscow – a tall, simple-looking, beared man with a gentle face. A military band came up marching up, playing the Internationale, and spontaneously the song caught and spread like wind-ripples on a sea, slow and solemn. From top of the Kremlin’s wall a gigantic banner unrolled… saying Long Live Brotherhood of Workers of the World.”

News of the revolution spread like wildfire throughout the world, inspiring and motivating the globe’s most impoverished, exploited and dispossessed people to fight for political freedom, social justice and economic prosperity. Indeed, without the Bolshevik’s victory in 1917, post-World War Two decolonisation across Asia and Africa, and the rest of the so-called third world, may have played out rather different - for many of the world’s most successful and ruthless liberation movements were inspired by Lenin’s teachings.

🚨 Lenin was born 150 years ago today—his writings on socialism, revolution & class struggle have inspired millions. To honour his birthday here are the best Lenin quotes! Starting with a classic:

​As India’s first post-independence leader Jawaharlal Nehru later noted, the revolution “advanced human society by a great leap and has lit a bright flame which could not be smothered, and it has laid the foundation for that new civilisation towards which the world could advance”.

The Soviet Union which Lenin created would also go on to directly assist national liberation struggles, providing aid of all kinds amounting to billions of dollars in value to emerging countries. This help allowed fledgling governments and states to pursue developmental policies independent from the global financial system, unbridled by capitalist boom-and-bust cycles, and trading on equitable terms more favourable to their citizenry. It’s no coincidence the demise of the Soviet Union in 1991, which  precipitated a rise in imperialist aggression worldwide, with dozens of countries invaded and/or subjugated by the US and its assorted allies in the decades since.

While reviled and revered in equal measure the world over in the present, even Lenin’s harshest critics could hardly deny his resounding and abiding impact on the world past and present. Indeed, in a biography of Lenin published after the Soviet Union’s fall, historian Dmitri Volkogonov concluded “there can scarcely have been another man in history who managed so profoundly to change so large a society on such a scale". After all, against all odds, Lenin constructed the principles and framework of a system of government that ruled Russia for seven decades, and served as the model for later Communist states, which at one point dominated a third of the world’s surface.

April 22. Comrade Lenin’s birthday. He was the chief theoretician of the 1917 October Revolution and leader of the Soviet Republic. pic.twitter.com/jWSYpa3dMP

​There’s little doubt then the October Revolution must be considered one of the most significant events of the 20th century - and if so, in the words of American historian Albert Resis, Lenin "must for good or ill be considered the century's most significant political leader". Academic James D. White described him as "one of the undeniably outstanding figures of modern history", while critical biographer Robert Service noted the Soviet leader was widely understood to be one of the 20th century's "principal actors".

Furthermore, while many Western historians and biographers have characterised his administration as a totalitarian police state, others have argued against the view Lenin was a dictator, and his government inherently authoritatian. For instance, In a study of Soviet state violence, historian James Ryan observes "the personal qualities that led Lenin to brutal policies were not necessarily any stronger than in some of the major Western leaders of the twentieth century" - and moreover, suggested for Lenin revolutionary violence was merely a means to an end, the end being the establishment of a socialist, ultimately communist world without violence. Soviet expert J. Arch Getty went even further, suggesting Lenin “deserves a lot of credit for the notion that the meek can inherit the earth, that there can be a political movement based on social justice and equality”.

Happy 150th birthday to one of the most influential revolutionaries in history, Vladimir Ilyich Lenin!

As a leader of the 1917 Russian Revolution, Lenin helped change the course of history, inspiring the oppressed & exploited everywhere to believe that another world is possible. pic.twitter.com/732k5PkZxg

​Before his death 21st January 1924, Lenin repeatedly and insistently expressed a desire for no monuments to be built to him posthumously - he believed “statues are for pigeons to s*** on”, and wished to be buried quietly alongside his family. Ironically though, many statues of the world’s most famous - and infamous - revolutionary dot the globe today, standing strident, tall and proud on every continent bar Australia. There are even five spread across the arch-capitalist US, which engaged in a bitter, decades-long conflict to end the very Soviet Union Lenin created. In Ukraine, over 500 Lenin memorials have been dismantled in the years following the Maidan coup of February 2014 - although around 1,300 remain standing, and several new structures commemorating him in the country have even been built since. Evidently, the Russian revolution and its international legacy - to which Lenin was so intimately fundamental - will continue to loom large and relevant for as long as capitalism can endure.