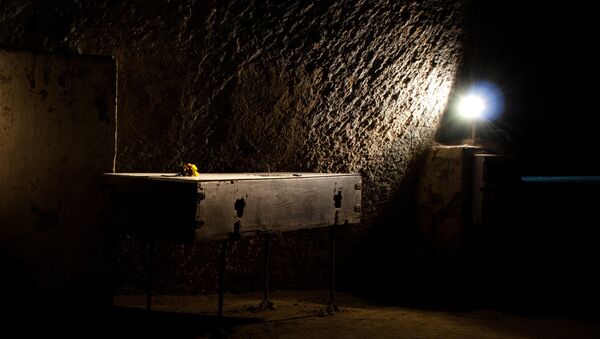 New Delhi (Sputnik): While attacks on doctors and police personnel have become rampant as they fight the deadly COVID-19 virus on the frontlines, it swooped to a new low when a doctor was denied a dignified burial and his funeral was attacked by a mob.

The wife of neurosurgeon Simon Hercules, who died battling COVID-19 on Sunday and was buried amid chaos late at night, has urged the head of Tamil Nadu to allow her husband’s mortal remains be interred at another cemetery as per his last wish.

In a 44-second video message she said, "it was his last wish" to be buried in the Kilpauk cemetery as per tradition.

"My husband died due to COVID-19. In his last wish, he said if doesn't survive the disease, he should be buried according to our customs. The Chief Minister is working well in containing coronavirus that's why, there are only a few deaths in Tamil Nadu", said Anandi Simon, the wife of the deceased doctor.

Making an emotional appeal she said his body should be exhumed from the Velangadu cemetery and buried in Kilpauk cemetery.

Dr SIMON'S WIFE ANANDHI SIMON REQUEST TO TN CM:-
PLEASE MAKE NECESSARY ARRANGEMENTS FOR MY HUSBANDS BODY TO BE REMOVED FROM VELANGADU AND BURIED IN KILPAUK BURIAL GROUND THEREBY FULFILLING HIS LAST WISH AND MY UTMOST DESIRE AS DR SIMONS WIDOW SO THAT HIS SOUL WILL REST IN PEACE pic.twitter.com/GCO80LpZIN

"My husband is buried in a sealed cover. His body should be taken again and buried at the Kilpauk cemetery and doing so will not spread the virus. I am now a widow with two children. I request the Chief Minister to fulfill the last wish of my husband", said Simon in the video.

Dr Hercules died from COVID-19 after getting infected by one of his patients. His burial was disrupted at two cemeteries in Chennai when a mob attacked the ambulance, carrying his body with sticks, stones, and bottles. The locals were against the burial of the doctor in the cemetery as he was infected with the virus.

Warning: People obstructing burials due to Corona deaths will be prosecuted under the Goonda Act.

The windscreen of the ambulance was smashed and even the casket was not spared by the mob, reported the media. Two sanitation officials were also severely injured during the attack. The doctor was buried in a haphazard manner by his friend Dr K Pradeep Kumar.