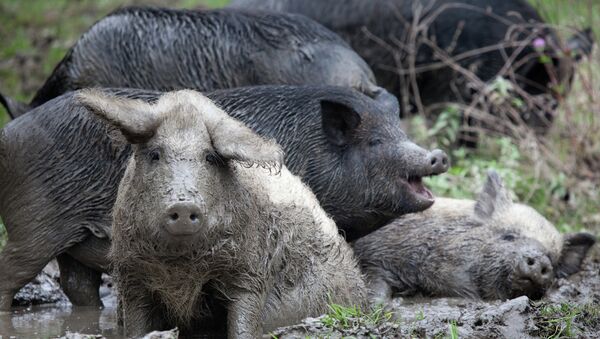 Prior to this incident, residents of the neighborhood had repeatedly complained to local authorities about aggressive wild pigs in the area, but no action had been taken.

A four-year-old child named V. Harshavardhan was killed and partially eaten by a herd of wild pigs on Tuesday in Saidabad, Hyderabad, India, according to The Times of India.

The animals reportedly attacked the young boy when he went out of his near his parents’ residence, a hut in the Singareni colony at 4pm to play, dragging him away to a rubbish dump, before eating parts of his body.

People in the neighborhood contacted the Saidabad police station soon after discovering the child's corpse. The victim’s parents arrived to the scene after the police arrived, and identified the body.

“A pack of pigs were loitering around the garbage dump and attacked the child on spotting him. The animals partially ate the body of the boy,” said Siadabad Station House officer K. Srinivas, according to the Daily Mail.

Harshavardhan was soon taken to hospital, where doctors declared the boy to be dead.

Prior to the terrible incident, neighborhood residents had repeatedly complained to the Greater Hyderabad Municipal Corporation (GHMC) about stray pigs roaming the streets of the neighborhood, but authorities ignored the pleas.

The four-year-old is said to be the first victim of the wild animals.

According to the Bangalore Mirror, local Balala Hakkula Sangham filed an official petition in the State Human Rights Commission, demanding a criminal case be opened against GHMC officials for their responsibility in the death of the child.