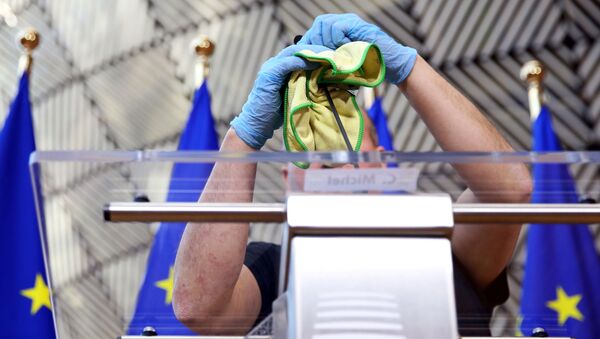 Lilia Dergacheva
All materialsWrite to the author
A “roadmap” that EU Council chief Charles Michel handed over to the EU member states contains no details on the amount of recovery aid or on the timeframe of dealing with the unprecedented COVID-19-induced fallout.

As European Union leaders head to a landmark video summit on Thursday, it appears there are no distinct proposals from the bloc’s institutions on how to finance a controversial economic recovery fund, with concerns having mounted long ago that the EU budget (1 trillion euros spread over seven years across the member states) is likely insufficient for post-COVID-19 funding.

In his letter, EU Council President Charles Michel says that they should "work towards" establishing a long-term rescue fund.

"It should be of sufficient magnitude, targeted towards the sectors and geographical parts of Europe most affected, and be dedicated to deal with this unprecedented crisis", Michel described the effort, wile giving no details on the preliminary objectives, timeframe, or amount of money needed.

He went on to propose asking the European Commission, the European bloc's executive body, to dig into this and come up with an ultimate comprehensive plan that will involve discussions on how the proposal relates to the EU’s seven-year budget.

Along with the letter comes a five-page "roadmap for recovery", compiled jointly with commission President Ursula von der Leyen. However, it doesn’t offer any concrete conclusions on how to divide the burden of the spending needed to salvage the crippled economies.

Leaders are expected to be asked to sign off on a 540-billion-euro emergency package to deal with the crisis agreed by EU finance ministers earlier this month.

Meanwhile, the newly drawn up budget for 2021-2027 “will have to take into account the effects of the crisis on regions and affected sectors", Michel said.

What is currently the most contentious issue is how additional funds in the budget will be raised - in the form of grants or loans, and whether the funding will come with conditions attached.

France, Italy, and Spain - the most corona-hit states in the EU - and several other countries have suggested EU nations could jointly source money to stem the crisis and help stimulate a rebound. The sums, it was proposed, were to be paid back later. However, these so-called "coronabonds" have been flatly rejected by Germany, the Netherlands, and a few other states.

The corona crisis has caused a healthcare crunch resulting in a massive economic downturn, with businesses and industries brought to a halt for at least a month, amid across-the-board lockdowns and self-isolation measures needed to prevent the novel virus from spreading like wildfire. The outbreak has to date seen 2,402,250 confirmed cases of COVID-19 across the globe, including 163,097 deaths, per updated WHO statistics.