‘Whinging’ Piers: Morgan Ridiculed Online as He 'Can't Be A**ed' to Mention the Sussexes on GMB 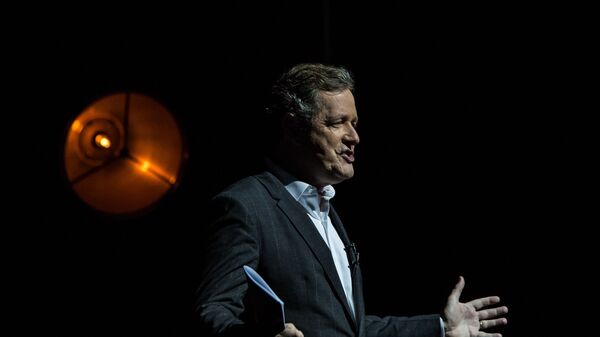 © AP Photo / Vianney Le Caer
Subscribe
Piers Morgan has a long history of ripping the Sussexes, who made headlines in January when they announced they were stepping down as royals for a more independent life. This time, the sharp-tongued host compared the couple, now residing in Los Angeles, to the “classy” rest of the family.

Good Morning Britain anchor Piers Morgan told viewers in an overwhelmingly straight-forward fashion that any mention of Prince Harry and Meghan Markle on his ITV show would be strictly forbidden.

As soon as he realised when reading his autocue that the next news story was about the ex-royal couple, he opted for a couple of swear-words:

His co-host, Sussanna Reid, weighed in emotionally calling him to “stop talking about them then".

In response, Morgan hit back continuing his rant:

"Stop defending them! I'm going to ban them from being mentioned on the show, they can go and sit in their palace and be annoying".

"I’m comparing and contrasting the class of Prince Phillip, which has been mirrored by the class of the Queen whose birthday is today", Morgan went on.

He held up a picture of the former Sussexes, noting pejoratively:

"These whiny little brats in Hollywood, banning newspapers, leaking details in court of all their texts to her father who is in his 70s, has underlying health conditions probably living in fear of COVID-19", he said, adding the time they picked to go on with their legal action and “drug all the mud out” is not at all good.

However, not everyone shared his point of view, with many suggesting it was jealousy prompting to attack the couple the way he always does:

Piers Morgan is jealous, he wanted Meghan Markle to be his wife but he is not Meghan's standard 😁😂👊

Piers Morgan makes savage dig at Meghan and Harry as he praises royals who 'stayed in the country' https://t.co/sk6DPpSXR7

“I'm sure they'll be devastated to hear this", one came forth.

“Lol they banned you before you ‘banned’ them! You wet blanket", another waded in, with another remarking that all he does “is whinge about them":

Well thank god for that. All he does is ‘whinge’ about them

However, on Monday, Morgan drew a bit of support on Twitter as he posted: "Interesting to see so many previously diehard ‘LEAVE THESE SAINTS ALONE!’ Meghan/Harry fans turning on them over their latest absurd me-me-me antics".

"The world’s changed and people have zero tolerance for whiny rich privileged pampered celebrities during this #Coronavirus crisis", Morgan called out the couple, with some echoing the stance:

"Got to be honest I was fully behind Harry and Meghan but it’s starting to grate a bit now", one subscriber wrote below the tweet.

"I agree with him. Get a feel for the room, guys!", another exclaimed.

Earlier this month, Morgan blasted the pair for constantly “seeking attention", despite the ex-Sussexes known to be dodging media attention. The couple is currently self-isolating in Markle's hometown of Los Angeles.

“Total number of [expletive] the British public give about these two announcing their ‘plans’ from Hollywood right now: 0", fumed Morgan, responding to the news of the Sussex pair announcing their new non-profit empire Archewell, named after their son.