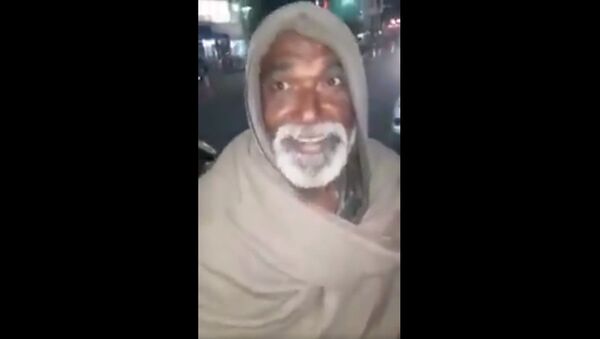 New Delhi (Sputnik): Amused at the skill of a beggar in tatters, several Twitter users wondered what brought the “talented” man to the streets, while others said his English and his accent were even better than of the man filming him.

“I beg”, said the man with a smile on his face when asked what he does to make a living in the streets of Bihar's Patna city. It turns out that the man not only speaks fluent English, but also dances and sings English songs.

This man, a beggar from Patna sings Jim Reeves "He'll have to go".
Priceless ❤️ pic.twitter.com/lJdoRjrxMa

The viral video has now racked up more than 11,000 views, with hundreds of comments expressing amusement and surprise at the man singing in flawless English, a widely spoken language which is termed necessary for career growth in the country.

Wonder what circumstances would have compelled him to be on the streets & beg ! Yet he looks so content ! This is a classic instance of having achieve Viveka (disenchantment) & Vairagya (detachment) from desires & he is clearly looking inward

What is impressive about him is he is happy and content.. that’s a great quality.

Others suspected that the man might not be Indian, but a Caribbean or African native.

His English is better than that of the person interviewing, but I think he is either from the Caribbean or Africa.